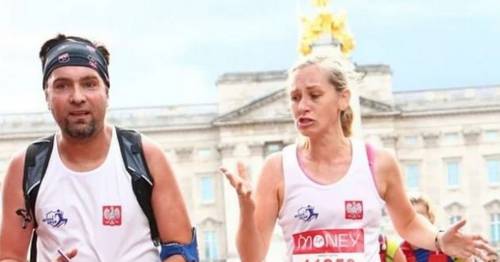 A couple who cheated in the London Marathon said they are "truly sorry" after eagle-eyed supporters noticed that they were sporting the same registration number on their vests.

Monika Czarnecka, 41, and her husband Piotr, 42, caused a frenzy after they were photographed wearing the same number (11250) on Sunday, October 3.

It later emerged that only Monika was authorised to take part in the event and that her husband, who could be seen running right beside her, had copied it so he could support her.

Ms Czarnecka told MailOnline: "I'm truly sorry for what we've done and didn't want to cause any harm.

Monika Czarnecka and her husband Piotr pictured here with the same registration number.
(

"The supporters were amazing, and their cheering and clapping helped me finish the marathon and it hurts to think that I've let them down.

"This was my first marathon and I needed Piotr's support because I was worried sick that I wouldn't be able to finish it."

Her partner Piotr confessed that he was unable to obtain a place in the marathon after missing out on the ballot.

He said: "It was all my idea and I take full responsibility for it. I know it's wrong and I'm truly sorry, but I did what I did to support my wife."

Piotr was able to duplicate the registration number that was given to his wife due to the marathon allocating numbers to participants a few days before the event.

Husband Piotr claims he only participated to support his wife
(

The pair were slammed on social media with some users expressing their frustration that they were both able to get away with partaking in the event.

One Twitter user wrote: "I've had 9 rejections in 9 years. This kind of thing is incredibly frustrating. Next year is my last chance. I'm not holding out any hope."

Another said: "It's not fair if we are paying around £200 for a charity place, stressing raising £2k, and you get virtuals or fakes on course really."

A London Marathon spokesperson has confirmed that they are looking into the incident.

They said: "We are aware of the images that show two runners wearing identical numbers and we are investigating.

"We take any incident where a participant cheats or forges numbers extremely seriously."

Previous : Who are Insulate Britain and why do they keep stopping traffic?
Next : Fujaira Prince dies just days before Ascot big race as horse racing fans pay tribute