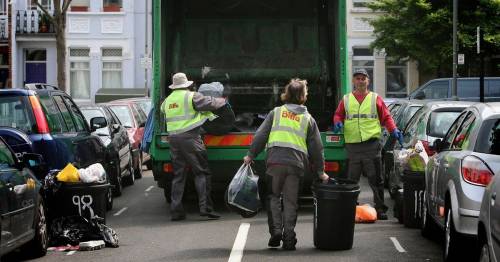 Several UK councils are suffering disruption to their bin collections due a lack of lorry drivers and staff self-isolating.

The issue affects 18 councils, and mostly means disruption to garden waste being taken away.

But some councils are also struggling to take recycling away because they need to divert staff to remove normal rubbish.

Waste management companies Biffa, FCC Environment and Veolia told the BBC they are "doing everything" they can to sort out the driver shortage.

Some councils are also struggling to take recycling away
(

Why is there a lorry driver shortage?

The UK is grappling with a national shortfall of qualified HGV drivers, due to a mixture of the pandemic and Brexit.

There is currently an estimated shortfall of around 100,000 HGV drivers in the UK.

The UK haulage sector has pinned the shortage on Brexit and the pandemic.

Before Brexit, many of the lorries on British roads were actually driven by EU nationals, many from Romania and Bulgaria.

Many stuck around after the Brexit vote, but then started returning home when the pandemic started.

Many European drivers face too much red tape to work in the UK after Brexit, while many other workers have been forced to stay at home and self-isolate.

Pay and working conditions for UK lorry drivers have also fallen behind those enjoyed in Europe.

There are thousands of HGV driver positions going unfilled as a result, though many supermarkets have increased the amount they pay drivers .

Lorry drivers are being offered a salary of up to £53,780 by Waitrose in one of the most surprising high-paid jobs currently available.

Yesterday The Mirror reported that Pizza Hut and Toby Carvery are the latest chains to suffer food shortages due to a lack of lorry drivers.

Pizza Hut ran out of ice cream and soft drinks at several outlets, with others having shortages of chips or gluten-free options.

Previous : Broadway raises curtain again on big musicals, and casts serenade the city
Next : Living near a shopping centre can slash as much as £260,000 off the price of house