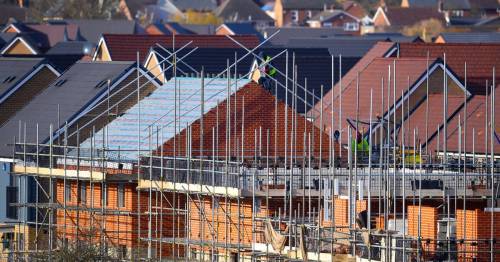 Council house waiting lists could double next year – with one in 10 people trapped in the queue for more than five years, town hall leaders warn today.

It feared council housing waiting lists could rocket to as many as 2.1 million households because of the impact of Covid-related support schemes winding down and a potential surge in homelessness.

In a report ahead of this month’s Budget, the LGA, the Association of Retained Council Housing and the National Federation of Arms-Length Management Organisations outlined plans to build 100,000 “green social homes” for rent each year.

But it called for the powers and cash from Whitehall to be able to hit the target.

LGA housing spokesman David Renard said: “There is a desperate need to build more social housing in this country, which should be a central part of the Government’s ambition to level-up and build back better following the pandemic.

“Social housing gives families the security and stability of a decent home, as well as being a route to owning your own home through Right to Buy.

“Now is the time to reverse the decline in council housing over the past few decades.

Housebuilding is a thorny political issue
(

"The benefits are clear – a programme of 100,000 social homes a year would shorten council housing waiting lists, reduce homelessness and cut carbon emissions, while delivering a multi-billion, long-term boost to the economy.

“Councils stand ready to work with the Government to tackle our housing crisis, but need the powers to build homes with the right infrastructure on this scale in the Spending Review.”

Housing charity Shelter said that “over a million families are stuck on social housing waiting lists with no idea if they’ll ever get the keys to a secure home they can afford”.

Chief executive Polly Neate added: “Unless the new Housing Secretary gets a grip on the housing crisis, it will only get worse as soaring energy costs, rising evictions, and cuts to Universal Credit really start hurting families.”

Jon Sparkes, chief executive of Crisis, said: “This research should be a wakeup call for the Government to face the reality that people experiencing homelessness and those at risk are paying the price for our continued failure to build the number of social homes we need.

“Behind these escalating figures are people forced to travel miles to take their children to school because they've had to be relocated away from their support networks, others trying to hold down a job while they move from one sofa to the next, then there are those living with the constant worry of how they will afford their rent and heat their homes when each day brings further financial pressure.

“Enough is enough. If we really want to rebuild a society and economy that works for everyone then building safe and genuinely affordable homes must be at the heart of this. Only this bold action will see us finally end homelessness for good.”

NFA chairwoman Sarita-Marie Rehman Wall said the “struggle to find a good home, and a home you can afford, is now very real and very tough for millions of people”.

She added: “Our national housing shortage isn’t just hitting one small group, it is creating hardship for all kinds of people in all walks of life – whether we’re talking about young people just heading out into adult or family life, or older people whose income drops at the very time when their need for support and the right kind of home increases.”

A Department for Levelling-Up, Housing and Communities spokeswoman said: “We are building more social housing and taking action to reduce waiting lists, which have fallen by almost 600,000 households since 2010.

Previous : Pervert cries as he’s jailed for flashing lone woman on train hours after prison release
Next : Boris Johnson could have saved thousands of lives by locking down days earlier – report