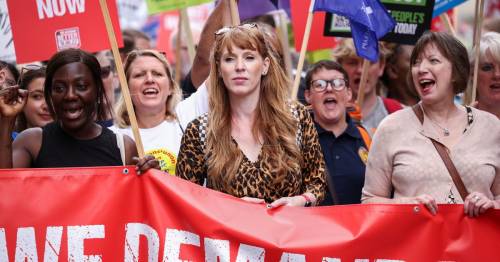 Thousands came from all over the land to march through central London.

Rail workers, cleaners, mums with placards, dads with pushchairs – a sea of people who deserve better.

Led from the front by a line of women – general secretaries and other trade union and community leaders – the most touching moment of the Demand Better rally on Saturday was seeing two care workers hugging on stage.

Yvonne Thomas, 55, had come from a 14-hour shift as a care worker, and was returning to one next day.

Fellow GMB organiser Patricia Gumbira, 52, took to the stage at the Parliament Square rally at her friend’s side.

The women hugged in front of thousands as the crowd cheered.

“I would not have missed today for anything,” Yvonne said. “This is our voice. I’m here to demand better for our children and future generations. And I will never ever stop fighting for care workers.”

Rail workers, cleaners, mums with placards, dads with pushchairs all gathered at the march
(

Patricia said she was there to fight for sick pay for care workers. “At the moment, many of us have to go to work sick because I can’t afford not to,” she says. “It’s disgraceful.”

Both women had been through a gruelling pandemic. “Delta swept through our care home,” Yvonne said.

“At times, my manager and I were the only people there, supporting 24 service users on 14-hour shifts back-to-back for day after day.

“I was so exhausted could hardly drag myself through the door, but I knew that I had to.

“In return we got those pathetic badges. None of us would wear them. My manager threw them in a drawer.

"Is that we were worth? They didn’t even say thank you.

“It really, really pains my heart to think we couldn’t see anyone, while they were party, party, party. Leaving dos, birthday parties. What example are you setting as the Prime Minister?”

Patricia said the image of the Queen mourning Prince Philip alone stayed with her. “Our Queen,” she said.

“Sitting in church on her own while some people were partying. That those people are still in power in a democratic country, I’m ashamed.”

After 12 years of austerity, two years of a pandemic, and now this – the worst Cost of Living crisis in decades – speaker after speaker told how there is nothing left to give.

As bills rocket, the cost of filling up a tank of petrol hits £100, and wages fail to keep pace with inflation, millions are being pushed over the precipice into poverty.

Trade unions are leading the fightback, with strikes planned over the summer, i ncluding on the railways, defending wages and conditions.

At the rally, the General Secretaries of some of Britain’s most famous trade unions, took to the stage.

But the audience of thousands heard workers speak from the frontline too.

“We’re not going to live in poverty forever,” Bella said. “It’s not going to happen. We are going to turn the tables on this.”

Bella was at the rally with other striking train cleaners, who work for Churchill on Govia Thameslink Railways, HS1, Southeastern Railways and Eurostar.

The men and women are currently taking strike action with the RMT to win a decent wage and basic rights.

She said the way the company had treated her during the pandemic had led her to the protest.

“Covid started getting rife in Hastings where I live,” she said.

“I had to come off work for six months to look after my mother as she was diagnosed with cancer.”

She says that despite having worked for Churchill for over three and a half years the company only offered her unpaid sabbatical leave.

“But that’s just my story,” I heard her tell a pre-rally on Thursday night for the New Economics Foundation, calling on people to join Saturday’s rally.

“On site visits I have heard so many stories from my fellow colleagues that are absolutely heart-breaking.

Yvonne said: 'I’m here to demand better for our children and future generations. And I will never ever stop fighting for care workers'
(

“Full-time working people going to work through the day, cleaning the trains to keep the public safe, keeping them sanitised.

"Some of them are sleeping at bus stops of a night-time because they cannot afford to live. It’s absolutely disgusting.

“There’s a mother with four children and they all have to live in one room.

"We’re not going to put up with it. I refuse to watch my colleagues struggle to survive rather than live, any longer.”

For Bella and thousands of others, attending the demonstration was a shot in the arm.

“Standing together side by side with comrades today gave us all the fire in our bellies for the fight ahead,” she said. “We demand better.”

Jacqueline Thomas, a member of Community Union who works at Llanwern Steelworks, had come all the way from NHS founder Nye Bevan’s home town of Tredegar, in South Wales, to march.

“I feel like my whole life-time we have just been losing jobs in our community,” she said.

“We lost the mines in the 1980s, we lost all the jobs at Ebbw Vale. Now the government are completely failing to support us through decarbonisation.

“I always say that steel is at the heart of every part of life – from the surgeon’s knife, to the scissors that cut the clothes you are wearing.

"We need support. Our community is struggling.”

Steelworker Keiran Stonely, 41, had come from North Wales where he works for TATA, colour-coating steel, and is the Unite branch secretary.

His wife is an A&E nurse who worked through the pandemic.

“There are foodbanks everywhere in our area,” he said.

“That didn’t happen in my parents’ generation even though times were tough. People can’t take much more.”

The PM wasn’t there to see the demo, returning from a Boris-boosting trip to Ukraine, dodging yet another crisis after his ethics advisor had to quit
(

TUC research suggests it hasn’t taken this long for real wages to recover from a slump since the Napoleonic Wars.

“Let me say this to Boris Johnson – don’t you dare shift the blame for inflation on to working people,” TUC General Secretary Frances O’Grady told the packed rally.

“Don’t you dare, not after a decade of austerity, privatisation and pay cuts. Don’t you dare tell working families we have to put up with more pain.”

But the Prime Minister wasn’t there to see the demo, returning from a Boris-boosting trip to Ukraine, dodging yet another crisis after his ethics advisor had to quit.

Patricia Gumbira, originally from Zimbabwe before making a new life in Birmingham, had another travel suggestion for him. “He is the one who has broken the law,” she said. “Let him go to Rwanda.”