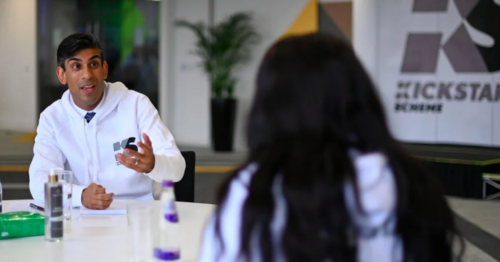 Job-hunting can be ­depressing at the best of times, churning out applications and often not even getting the ­courtesy of a rejection letter.

One 23-year-old thought his luck had finally turned when he was invited for an interview for a marketing post and was told he’d been successful.

But that was the last he heard. His supposed new employer, Aspect Business Services Limited, seems to have vanished.

The post was advertised on the Department for Work and Pensions’ findajob website and was part of the Government’s £2billion Kickstart scheme.

Under Kickstart, firms get £1,500 from the taxpayer for taking on people aged 16 to 24 who are on Universal Credit, and the ­Government funds new employee salaries, up to 25 hours at the minimum wage per week.

A job-seeker called Simon (I’m ­withholding his surname) applied for one paying £11.50 an hour. After a phone interview that lasted about two minutes he was offered the post.

However, the promised contract was never emailed and his emails to Aspect Business Services have not been answered.

“It’s horribly disappointing to be told you’ve got a job and then for that job to disappear,” said Simon.

“With hindsight, perhaps I should have been more suspicious when the phone interview was so brief. Also, their email offering me the role said my contract was attached but there was no attachment, and it gave my start date as several weeks earlier. It was all very amateurish.”

That’s not all that was suspicious – the company’s website included chunks of text lifted from an unconnected construction firm.

Yet according to ­Companies House, Aspect has nothing to do with construction, its business being listed as office administrative activities.

Aspect has only filed one set of accounts to ­Companies House, which claims that it has shareholder funds of more than £18million, including tangible assets of more than £6million, but the accounts are unaudited.

Its website is now down, resulting in the peculiar situation of a company that claims in its accounts to have made an annual profit of £7million and have 157 employees, yet having no online presence.

I can’t even find anyone on LinkedIn who says they work for it and the phone number given to Simon no longer works.

The sole director is named on Companies House records as Daniel Scholes, 60, of Nottingham. He was also a director of a company called ­Cavendish ­Incorporated Limited.

Last August, the Financial Conduct Authority issued a warning about this firm, saying savers had lost substantial funds invested in its bonds or loan notes.

The website of another company that recruited for Kickstart ­positions, Arrowglass Commercial Limited, is also now unavailable.

It lifted the same chunks of text from the legitimate ­construction business and also advertised jobs on the Kickstart scheme before disappearing.

It too has zero online presence despite claiming in its Kickstart jobs to be a nationwide surveying company and its filed accounts claim assets of £17.8million.

According to those accounts, which are also unaudited, it has more than 200 employees, though I can’t find a single one on LinkedIn.

I have been unable to contact either Aspect Business Services or Arrowglass Commercial.

Last September, the Work and Pensions Secretary Therese Coffey told MPs that around 8,000 ­applications by firms for Kickstart money were “verging on fraudulent”.

A spokesperson for the ­Department for Work and Pensions said: “We have robust controls in place to identify and reduce the risk of fraud and error which has been kept low in the Kickstart scheme.”