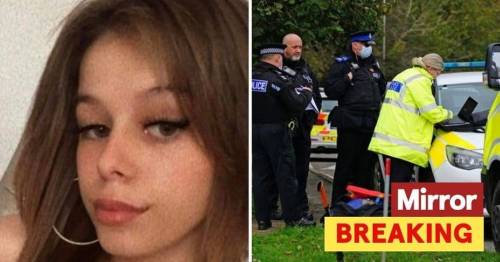 A man has been charged with the murder of teenager Bobbi-Anne McLeod.

Cody Ackland, 24, has been remanded in custody having been charged with murder in connection with the disappearance of the 18-year-old, Devon and Cornwall Police said on Friday morning.

A huge search effort was launched to find the teenager after she was reported missing on Saturday.

Police sealed off Devon's Bovisand Beach on Tuesday and confirmed that a body had been found as part of their search.

In a statement, Devon and Cornwall Police said: "A 24-year-old man has been charged with murder in connection to the disappearance of 18-year-old Bobbi-Anne McLeod.

"Cody Ackland from the Southway area of Plymouth, has been charged with murder and remanded in police custody.

"He is due to appear at Plymouth Magistrates Court on Friday 26 November."

The teenager was reported missing on Saturday

The family of Bobbi-Anne have been informed of this update and continue to be supported by specialist officers."

Bobbi-Anne's heartbroken brother Lee shared a tribute to his sister on Tuesday night.

He said: "Until we meet again sis. I love you.

"You didn't deserve this, such a beautiful and talented girl and to have you as my little sister the adventure and journey we had been on will always be treasured.

Bobbi-Anne's family sounded the alarm over her disappearance after she failed to meet up with her friends as scheduled last week.

She was expected to catch a bus from Sheepstor Road, in Plymouth, however her ticket was never used.

The teen was last seen wearing a grey jumper, black ripped jeans and Nike trainers as she left her home on Saturday.

Close friends of the teen previously said they were growing increasingly concerned after police found what were believed to be her headphones and a pouch of baccy at a bus stop.

Close family friend, Amanda Issacs, 34, said the teenager had been on her way to meet her boyfriend when she disappeared.

Announcing the discovery of a body in their search for Bobbi-Anne, a spokesman for Devon and Cornwall Police said: "Detectives investigating the disappearance of 18-year-old Bobbi-Anne McLeod have launched a murder investigation.

Police at the scene on Thurlestone Walk in Plymouth, after the body was found
(

"Bobbi-Anne was reported missing to police on Saturday 20 November after she failed to meet with friends in Plymouth.

"Police officers and staff have been engaged in enquiries with members of the public and completing searches since concerns for Bobbi-Anne were first reported.

"Sadly, earlier today the body of a woman was located near Bovisand, South Hams during searches by police officers. These searches were carried out following information received by police.

"Enquiries remain ongoing in relation to this matter and anyone with information which may assist the ongoing investigation is asked to contact police on 101 quoting log 706 22/11/21."

A GoFundMe page has been set up to help Bobbi-Anne's family give her 'the best send off', following the discovery of a body.

Writing on the page, pal Amanda said: "I am a close friend and neighbour of Bobbi and her family. Unfortunately it has been confirmed after three days of searching she has sadly been taken from us.

"She was a beautiful young girl only aged 18 with her whole life ahead of her. As you can imagine her family are going through hell, so would like this fundraiser to even help take the stress away of all this even, if it really is just a little bit of help.

"She deserves the best send off as the beautiful girl she come into this world. R.I.P sleep tight with nan and grandad. You are with the angels now."