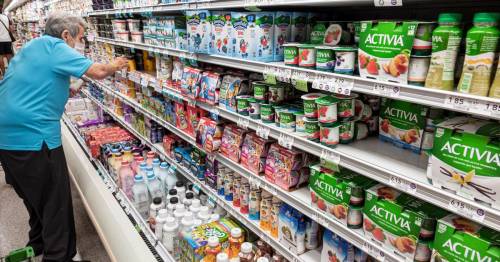 The Co-op supermarket has scrapped use-by dates on yoghurt – and is urging Brits to use their common sense instead.

Supermarkets are beginning to end use-by dates to cut down on food waste.

Morrisons has scrapped the dates on its own-brand milk , while many retailers have stopped putting the dates on vegetables.

Now the Co-op has unveiled plans to end use-by dates on its own-brand yoghurt to reduce the amount of food we throw away.

Around six million Brits eat yoghurt every day, the BBC reports – around 9% of us.

But research from food waste charity Wrap shows half of these are thrown away in packs that were never opened, because they have gone past the 'use-by' date.

The Co-op will be keeping best-before dates on its own yoghurts instead.

Nick Cornwall, head of food technical at the Co-op, said yoghurt is mostly fine to eat after the use-by date, provided it has been kept unopened in a fridge.

The natural acids present in yoghurt help keep it fresh, he added.

The Co-op food expert said shoppers should "use their judgment" if their yoghurt has gone past its best-before date.

Consumers should use their sight and smell to determine if food is edible past its best-before date, according to the Food Standards Authority watchdog.

"Controlling food waste is not only beneficial for managing household budgets, it also has an environmental benefit and will ultimately help reduce carbon emissions," he added.

Calls to scrap use-by dates have been going on for more than ten years, with government ministers and food experts saying they increase the amount of food we throw away .

Supermarkets have also agreed to sell most fresh fruit and vegetables loose rather than packed in plastic , to help the environment.

All major supermarkets have signed up to guidelines by sustainability organisation Wrap to sell loose produce by 2025.

Apples, bananas, broccoli and cucumber will be among the first to be sold without plastic wrapping, The Grocer reports .

Other items that will soon be sold with no packaging include aubergines, avocados, carrots, onions and peppers.

Wrap thinks 80% of fruit and vegetables can be sold with no wrapping.

It estimates this will save more than 21,500 tonnes of plastic being thrown in the bin every year.

Previous : Meghan Markle will celebrate extra special day with kids Archie and Lilibet today
Next : Woman reveals how to save £300 on food – including exact time to go to supermarket