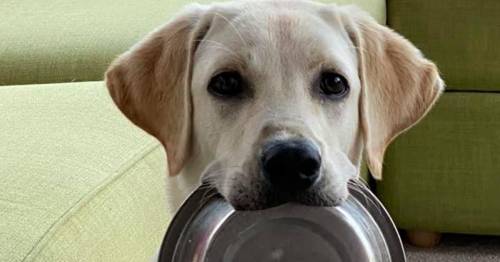 This pooch has been dubbed a "very clever boy" after he ripped up his owner's "don't feed the dog" sign before strutting up for seconds with a food bowl between his jaws.

Owner Beth Durney, 45, welcomed yellow Labrador Wilbur into the family earlier this year and soon discovered the 22kg puppy is skilled at tricking his owners into dishing up extra helpings.

Beth has had to put a sign up saying "dog been fed" to avoid greedy Wilbur enjoying two dinners.

She has also locked away his dog food so the sneaky pup can't get to it.

In a hilarious picture posted on social media, an angel-faced Wilbur is seen holding a bowl in his mouth begging for an extra helping of food.

As well as using his "puppy dog eyes" to score an extra meal, Wilbur also has a bad habit of gobbling down dead rodents when he finds them on his walks.

Hilariously, the pooch tore up a note which warned he had already been fed
(

He then nipped off and came back with a dog bowl in his jaws, clearly ready for his next meal
(

Beth, from Leeds, West Yorkshire, said: "When I saw him, I just laughed. It's typical of Wilbur.

"He did it not long after I'd got in from work. It was there all day then it blew off the counter and Wilbur decided to eat it.

"He's the master of irony. I managed to get the sign off him then he trotted in with the bowl in his mouth.

"The 'dog's been fed' sign is because me and my husband work shifts. Sometimes he'll get up earlier than me and he'll say 'dog's been fed' or not, because you can't tell. He'll eat all the time.

"The bowl is his go-to thing. He likes carrying his bowl around with him.

Beth said the pooch loves carrying his bowl around with him
(

She added "you wouldn't believe" what he can eat
(

"You wouldn't believe what that dog can fit in his gob."

Beth and her husband first bought Wilbur after their Dalmatian passed away in February and soon realised the hungry mutt loved his grub.

Beth said: "The breeder did say 'he's a character' and we thought 'how can you tell at that age?' Then we got him home and he is.

"He's very intelligent, strong-willed. He's good because he'll lie down, heel, sit. We got on top of that with constant training but every now and then, he'll have his moments.

"We have to lock his food away. We can't leave that out. He's a Labrador. He'd eat the whole thing, or as much as he could. He's very food orientated.

"Wilbur's got various nicknames. Obviously, he's Wilbur. Then 'Chillbur', when he's lay down and being nice and calm – which is not very often.

"There's 'Wilberine', which is when he's been a nightmare and jumping about all over the place.

"Then when you tell him to stop or threaten him with time out, his nickname is 'Lurpak' because he'll look like butter wouldn't melt.

"He currently has a lovely habit of finding dead rodents in the field when he's out on walks – then he eats them.

"I snapped a picture to show my husband then sent to a WhatsApp with my mum and dad. They thought it was hilarious."

Previous : China protests passage of US destroyer through Taiwan Strait
Next : Somerset ‘murders’: Married couple killed in home with kids in bed ‘after row’ pictured