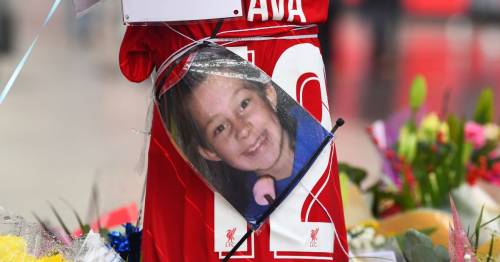 The chilling texts a boy accused of murdering Ava White sent to his mum as the 12-year-old was dying have been revealed in court.

Ava White’s alleged murder texted his mum to say he was going to “end up going the cells for noting”.

The 12-year-old girl was stabbed in the neck during an incident involving a teenage boy in Liverpool city centre, The Liverpool Echo reported.

Boy A, 14, from south Liverpool, cannot be named for legal reasons and denied murder and manslaughter.

Prosecutors have said that he stabbed Ava after she pushed him during an argument over him filming her and then posting it on Snapchat.

After stabbing her, Boy allegedly smirked, laughed and ran away, leaving her to die.

After that he began a “cover up” by discarding his knife, designer coat and mobile phone.

A jury has heard how the boy accepts responsibility for fatally injuring Ava on November 25 last year but argued it was in self-defence.

The second day of a trial at Liverpool Crown Court saw CCTV footage of the stabbing that took place around 8.35pm.

The jury was later shown various clips of Boy A and one of his friends, Boy B, 14, running away from the scene and heading out of the city centre.

Boy A ditched the knife near some derelict houses and put his designer coat in a blue bag in a wheelie bin.

The court heard that the knife wasn't recovered by police until March 16, months after the stabbing and only when Boy A told officers where to find it.

DNA evidence matching Ava was identified on the blade.

Forensic officers on the scene of the stabbing
(

Boy D was later arrested at a bus stop on Great George Street.

Footage was played of the three other boys going into a Go Local Shop on Parliament Street at around 9pm where Boy A was shown using his phone in the store.

Charlotte Newell, QC, prosecuting, said around 15 minutes later, a series of texts were exchanged between Boy A and his mum. Police had gone to her home and she had called her son, but he hung up.

Here are the messages read out in court today. They have been redacted for legal reasons and to censor expletives.

Mum: "Someone has been stabbed in town and I've been named that u was there x"

Boy A: "So that means I will have to go the cells"

Boy A: "Cos they will have to interview"

Police cordon on Church Street in Liverpool city centre on 26 November 2021, near where Ava White, 12, was stabbed to death the previous night
(

Mum: "If you don't come home you will get the blame"

Boy A: "Me and everything"

Church Alley was closed off after the stabbing

Church Alley was closed off after the stabbing (Image: Liverpool ECHO)

Boy A: "Not going the cells for stn I haven't done"

Mum: "So you need to get here speak to them tell me were you are and they will get you to bring you home cos if you proof you wasn't in town then"

Boy A then sent his mum a photo. Ms Newell said it showed a large TV in a domestic address.

Tributes to the murdered 12-year-old
(

Boy A: "Playing the game me show them they can speak to me here I will show them proof here"

Mum: "Can they come to Boy C's flat to speak to you x"

Boy A: "Watch if you send them here"

Boy A: "No actually"

Boy A: "Up going the cells for nothing"

A tribute to Ava White
(

Mum: "You won't be getting locked up if you wasn't there then you need your mates to be here so you need to speak to [name redacted] and [name redacted] and Boy D's mum for them to be your aliby that I want in town tonight and I've been in Boy C's all night have you got any pics or screenshots at around 8 o'clock that you were in Boy C's"

Mum: "Will you talk to me please?"

Boy A: "Not going the cells"

Mum: "Why will you go to the cells if you wasn't there only want to speak to you x"

Mum: "It wasn't you and if you go missing that makes you look guilty x"

Mum: "They only want to ask you question if you know anything about it x

Boy A: "Mum I know the way they have raided Boy C's [relative's] so me and Boy C are getting nicked"

Ms Newell said 15 minutes later, at 10.16pm, Ava White was pronounced dead at hospital. Boy A was arrested in Toxteth at 10.31pm.