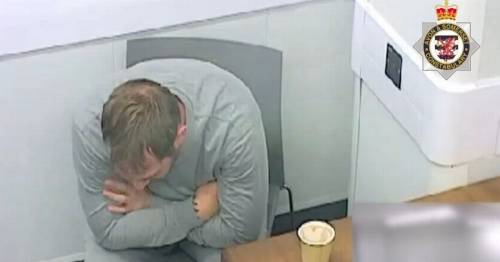 A chilling video capturing police interviewing Collin Reeves shows the former soldier breaking down as he is quizzed about his murder of his two neighbours.

Reeves, 35, was on Friday found guilty of murder at Bristol Crown Court after killing Jennifer and Stephen Chapple on November 21 last year in Norton Fitzwarren, near Taunton in Somerset.

Reeves and his family lived next door to the Chapples in a new-build development. The households had fallen out over parking in May 2021 and there had been a number of angry exchanges between them before Reeves’ double murder.

A new video released by police shows a largely unresponsive Reeves sitting hunched over in a chair with his arms crossed over his body while he's being questioned by police.

An officer, who is out of shot, said to Reeves: “Firstly, I just need to ask you, when you were arrested and brought into custody, when you were being assessed in custody here, you said to the custody nurse: ‘I shouldn’t have done it, I’ve ruined their lives and mine’.”

Collin Reeves, 35, was on Friday found guilty of murder at Bristol Crown Court

“Can I just confirm that you said that?”

With the tiniest shake of his head, Reeves replied quietly: “No comment”.

The officer continued to probe: “And what did you mean by that?”

At this, Reeves shakes his head again and mumbles something indistinguishable.

The officer then said: “Okay, Collin, in as much detail as possible, tell me what happened yesterday in Dragon Rise, that led to the death of Jennifer and Stephen Chapple.

“Explain to me exactly what happened inside Dragon Rise.”

Reeves appears to slightly shake his head once again, but does not answer the officer’s question.

A few seconds later, the officer asks: “Did you kill Jennifer and Stephen Chapple?”

At this, Reeves lets out something of a snivel as he pulls his arms from around his torso to put his head in his hands.

As he then puts his hands over his face, he said, more audibly: “No comment”.

The officer pressed: “How were you involved in their deaths?” but Reeves doesn’t reply, merely shaking his head in his hands as he sits doubled over.

The release of the footage comes just hours after a jury determined at Bristol Crown Court that Reeves was guilty of the double murder.

Reeves had stabbed and killed married couple Jennifer, 33, and Stephen, 36, just 40 minutes after his wife, Kayley, had asked for a trial separation.

He accepted that he stabbed Mr and Mrs Chapple, but denied murder, and has pleaded guilty to a lesser charge of manslaughter on the grounds of diminished responsibility.

After the verdict, the couple's family issued a statement, which said that "no verdict" could bring back "beautiful" Jennifer and Stephen.

Afghanistan veteran Reeves had served with the Royal Engineers
(

''If anything, these past ten days have prolonged us finding out how Jennifer and Stephen spent their final moments," it said.

It went on to acknowledge the support they had received from their friends and family as well as the support from friends of the pair – which showed "how loved they both were".

“We now ask that we are left to process this in our own way, to be able to grieve properly and move forward as best we can."

The Afghanistan veteran, who served with the Royal Engineers and completed the gruelling commando training, used the ceremonial dagger he had been given when he left the Army.

Forensic psychiatrist Dr Lucy Bacon, who assessed Reeves on behalf of the defence team, concluded that he had been suffering from moderate depression at the time, but said he did not have symptoms consistent with acute post-traumatic stress disorder (PTSD).

Giving evidence during the trial, Reeves told the jury: "I feel ashamed – disgusted with myself for what I've done. For the pain and suffering I caused.

"The two boys will never see their mum and dad again because of me. I can not understand why I did it."

Reeves claimed a loss of memory from when he was sitting on the stairs crying, with the dagger in a frame "at the bottom of the steps" to when he was back in his own living room, with his "wife screaming".

The trial heard Reeves had joined the army in 2006 and eventually completed the commando course.

His 11-year military career included a tour of Afghanistan and his wife Kayley told the trial he had never been the same since returning from the war zone.

He will be sentenced on Tuesday morning at the same court.

Previous : Royal Ascot weather at 31C as chiefs relax dress code with misting fans for the horses
Next : Neighbours scared as ‘inquisitive’ vulture lands in gardens and interrupts tea parties