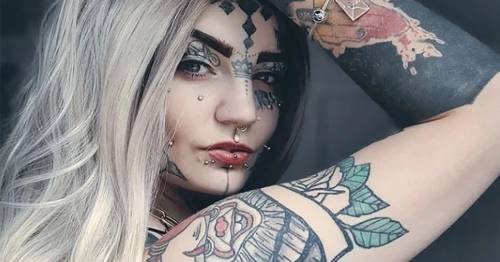 A mum, 23, was left looking so different to her usual self that her own children didn't recognise her after having her 40 tattoos covered up for an experiment.

Aimee Smith was not impressed by the transformation that left her mother in tears and children questioning if she was a stranger.

The 23-year-old, who has more than 40 inkings, including several on her face, is known by many as "the girl with the tattoos".

She told the Daily Star: “I can’t express enough how much my tattoos are a part of my life.

"I live in such a small town and everyone knows me just from my appearance. They don't know my name, it’s just the girl with the tattoos."

Despite inkings being such a big part of her identity, Aimee agreed to get them covered up for an experiment.

Aimee, from Oakham, East Mids, said: “I was not impressed. I was trying so hard not to cry.

“To some people, it's just being covered in makeup but I was disgusted seeing myself looking like that.

“I know it's a strong word but I felt vile and horrible in myself. I felt so uncomfortable and it was like looking at someone who I didn't know.”

The mum-of-two added: “It takes a lot for my mum to cry.

"I was shocked to hear her say how beautiful I looked but at the same time because I’ve had face tattoos for so long and they are such a big part of my life she was like, ‘that’s not my daughter’.”

Alternative model Aimee got her first face tattoo aged 19 and took part in the recent transformation for an episode of Hooked on the Look.

She decided to do it after trolls had told her she had “ruined” her face and that a parent having so many was “unacceptable”.

Aimee also wanted to remember what she used to look like before the ink – but the makeover just made her appreciate her unique style even more.

She said: “Since doing that programme it was like, ‘wow I really am so comfortable with who I am’.

"After the camera people left I was like I really need to get in the shower. I had to pick my kids up and my youngest wouldn't even look at me because he had no idea who I was.

"Their reaction made me realise just how much my tattoos are a part of me."

She added: “I have since gone on to do things I wouldn't have had the courage to do – last week I was even invited to a local primary school to teach children about tattoos.

“There were times I’ve felt like a caged animal because of my tattoos but now I am just proud of who I am and don’t care what others think.”

Aimee began to be fascinated with tattoos when she watched shows like Miami Ink as a little girl.

She then adopted an alternative style aged 10 – something she describes as never having grown out of.

Shortly after turning 13, she got her first tattoo and the model is now a mum to boys Elijah, six, and Remy, one.

Aimee's children have inspired some of her most powerful tattoos.

She said: “The majority of my facial tattoos are the most meaningful and I have three nails on the side of my face.

“I got those after the toughest two years of my life and they stand for me and my children and it has barbed wire wrapped around it, to me it represents the strength of me and my family.”

Aimee also has a heart on her cheek along with Papa Roach lyrics tatted to her eyelids.

The years her children were born are also inked to her knuckles.

Aimee was given her own tattoo machine aged 14 and she soon tatted an elephant to her ankle in tribute to her stepdad.

She has also experimented on other parts of her legs and the mum is now planning to get her whole body covered in ink and she said her artwork will always be a huge part of her identity.

She added: “Over the years tattoos have really helped me find myself and to get out of that tunnel of not knowing who I was.

“They have helped me find who I am and I don’t know who I would be without them.”