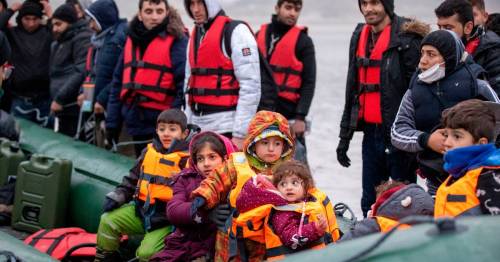 At least 33 migrants died in the Channel today as the lives of these children were put at risk making the same crossing.

The six, pictured above, were put on the dinghy near Calais as French police looked on, doing nothing.

This group survived the journey, but hours later a child and five women were among those who died when their boat capsized in the ­Channel’s worst-ever migrant boat disaster.

PM Boris Johnson tonight said that he was “deeply saddened” by the tragedy.

Migrants drag a huge inflatable across the beach to the sea, with French police watching from a pick-up as children are put on the boat for the perilous Channel crossing.

The two officers did nothing to stop the dinghy setting off near the town of Wimereux just after 8am.

French police did nothing to stop the launch
(

Mercifully, six-and-a-half hours later it arrived on the coast near Dover, where Border Force officials were there to help.

The group survived the journey on the day at least 33 other desperate migrants, including five women and a young girl, died attempting the same crossing.

French interior minister Gerald Darmanin described the victims’ vessel as “very frail, like a pool you blow up in your garden”.

French President Emmanuel Macron called for an emergency meeting of European ministers, as he vowed: “France will not let the Channel become a cemetery.”

The scale of the tragedy unfolded in the afternoon when fishermen out at sea 10 miles north of Calais spotted bodies floating in the waves.

By evening, French Coast Guard and Navy vessels had retrieved 31 bodies, and two survivors, with boats and helicopters searching for more.

Six people had been seen alive in the water.

The British Coast Guard was helping the operation and, with more than 20 dinghys setting out today, officials fear other vessels could have sunk too.

Four suspected traffickers were arrested and Dunkirk prosecutors have opened a criminal investigation for manslaughter and “assistance with illegal immigration”.

Gangs have been charging refugees more than £3,000 for passage in inflatable dinghies, with life jackets of little use in the treacherous currents and freezing temperatures of the Channel.

The joint rescue operation was called off late tonight.

Mr Darmanin said: “There are no words strong enough to describe the criminality of the smugglers.”

Before today's tragedy, 14 people had died attempting the crossing this year.

More than 4,000 migrants have made the journey in November alone, the most ever in a single month.

Britain pledged to give France £54million to stop the crossings but tonight Boris Johnson, who chaired a Cobra meeting on the crisis, offered more support.

He said: “The operation being conducted by our friends on the beaches, supported with £54million from the UK to help patrol the beaches, the technical support we’ve been giving, they haven’t been enough.

“Our offer is to increase our support and to work with our partners on the beaches concerned, on the launching grounds for these boats.”

He said smugglers had to be shown “they can’t simply get people over the Channel”, or they would continue to “get away with murder”.

A tot is taken to a dinghy on the beach at Wimereux, France today
(

France has refused to let UK officers work on the other side of the Channel to detect people-smuggling operations.

The two French officers at the beach near Wimereux were powerless to stop the boat launching with around 40 families on board.

The police truck flashed its lights and circled the migrants but soon gave up and went to patrol another area of beach.

Home Secretary Priti Patel posted: “This Government’s New Plan for Immigration will overhaul our broken asylum system and address many of the long-standing pull factors encouraging migrants to make the perilous journey.”

A group leaving the coast of northern France
(

But the Government is under pressure to offer safe asylum routes.

Labour leader Keir Starmer tweeted: “The UK Government, France and the wider international community have a duty to prevent people being forced into such peril.” Enver Solomon, of the Refugee Council, called for “safe routes for those men, women and children in desperate need of protection”.

British Red Cross chief executive Mike Adamson said: “Everyone deserves to live in safety and it should be unacceptable to us that people have no choice but to make dangerous crossings in their search for this.”

The deaths in the Channel were a tragedy waiting to happen.

We knew that desperate people were risking their lives on a daily basis to seek a better life. And we knew they were being exploited by people smugglers.

And we knew that unless something was done, it would result in the loss of lives.

Politicians on both sides of the Channel pledged action but what was promised was not delivered.

Migrants headed for the UK
(

In September 2019 Home Secretary Priti Patel agreed a joint plan with France for 24/7 patrols on the beaches of northern France, greater intelligence sharing and “intense efforts” to tackle gangs.

These measures, we were told, would prevent the majority of crossings by the spring of 2020. But so far this year more than 25,000 people have crossed and we are struggling to control our borders.

It is not for lack of money. The UK Government paid the French £44.5million in 2018, followed by a further £55million in July this year.

More than 4,000 migrants have made the journey in November alone, the most ever in a single month
(

With some justification Britain claims France is not keeping its side of the bargain.

But much of the blame lies at the door of the Government. It has all but shut the door for genuine asylum seekers. With no safe passage, those escaping bloodshed and oppression turned in desperation to criminal gangs.

And now we are out of the EU we are no longer part of the Dublin agreement that states illegal migrants must be processed in the EU country they first entered.

Both have been in short supply.

Previous : Dog rushed to vet after eating cannabis leaves in park months after scoffing spliff
Next : ‘Does Stella Creasy know all working mums have a juggling act with babies?’ – Eva Simpson