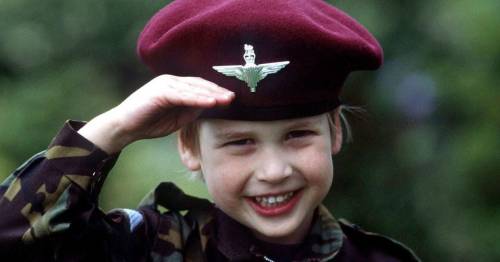 There are countless examples of Prince William having the ultimate cheeky streak when he was younger, whether that is blowing raspberries during his uncle's wedding or misbehaving on the Buckingham Palace balcony.

One of the best stories, however, comes from a former palace chef who revealed the naughty trick the young prince played on his cousins, Princess Beatrice and Princess Eugenie at Easter time.

The Royal Family usually spends Easter at Windsor Castle. The family will attend a service at St George’s Chapel and then return to enjoy a meal of roast lamb and seasonal vegetables.

Former royal chef Darren McGrady explained that one year when Prince William and his cousins were children, he decided to make them a Hickory Dickory Dock nursery rhyme-themed chocolate egg.

Prince William had other plans in mind for the chocolate treat
(

He scared his young cousins, Princesses Beatrice and Eugenie
(

But Prince William, being his ever-so cheeky self, had other plans in mind for the chocolatey creation.

Speaking to OK! Magazine, Mr McGrady said: "[The chocolate egg] had a clock on the top striking one and a sugared mouse peeking out of a mousehole. We sent it up to the nursery on the silver tray, but 15 minutes later the Footman brought it back.

"He said, 'Nanny asked me to return this. Prince William has just stood on a chair and bitten the mouse’s head off, frightening Beatrice and Eugenie.'"

McGrady went on to say that he jumped to action, quickly making another mouse to replace the one Prince William had destroyed.

He continued to say: "I think Nanny put the egg out of William’s reach to make sure it didn’t happen again."

Prince William is very well-known for his love of chocolate – especially when it is used as a part of one particular cake.

McGrady – who worked for various royals during his 15 years serving the crown – previously explained that he used to create a chocolate biscuit cake for the Queen – who he has called a “chocoholic” – and William enjoyed it too.

In fact, he enjoyed it so much that he requested it as his groom’s cake for his wedding to Catherine, Duchess of Cambridge in 2011.

Prince William’s love of chocolate was also the main talking point during the couple’s virtual visit to a school in Lancashire in April 2020.

As the children showed their Easter bonnets to the Duke and Duchess and spoke about their plans for the day, William said: "There'll be a lot of chocolate being eaten". To which Catherine joked: "You keep eating it."

The Queen is also well-known for her love of chocolate
(

Just like her grandson, The Queen is famous for having a very sweet tooth and is known to enjoy everything from chocolate to cakes on a regular basis.

McGrady previously spoke about how the monarch regularly takes afternoon tea and divulged exactly what she enjoys eating.

He said: "When I started as a young chef at Buckingham Palace, it was fascinating to see how important afternoon tea was to the Queen." He revealed that the Queen enjoys a "full afternoon tea of sandwiches and pastries".

He says: "In terms of scones – one day plain and one day with raisins folded through.

"Also, tiny pastries like raspberry tartlets and a cut cake, honey and cream sponge, fruit cake, banana bread, or her favourite chocolate biscuit cake. It would all be 'washed down with a delightful steaming hot cup of Earl Grey tea."

The chef told previously TODAY Food: “The chocolate biscuit cake is Her Majesty The Queen’s favourite afternoon tea cake by far. It is her favourite cake that she eats until it is all gone.

"If there was anything left when she had it at Buckingham Palace, it would then go to Windsor Castle so she could finish it there. I used to travel on the train from London to Windsor Castle with the biscuit cake in a tin on my knee. It was half eaten."