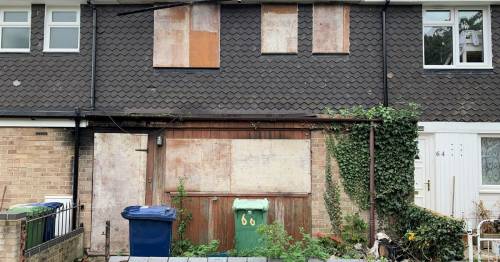 Cheapest house in city on sale for just £50,000 – but it may need totally rebuilding

A fire-ravaged three-bed home in Oxford has gone on the market for just £50,000 making it the cheapest property in the city.

The terraced house in Cowley has been listed for the modest sum after being burnt to the ground in February.

Ten months after the tragic blaze which claimed the life of the previous owner, potential buyers are being given the opportunity to take on the "ultimate fixer upper" that would need a complete rebuild.

Repair work alone could cost hundreds of thousands of pounds, buyers have been warned – so it's better to knock it down entirely and rebuild.

Got a story? Email webnews@mirror.co.uk

The property is by far the cheapest in expensive Oxford

The property is by far the cheapest on the market in Oxford but comes with no roof, is currently boarded up and is need of a lot of work.

The listing, on Mchugh and Co, warns potential buyers that they view the house "at their own risk" due to the condition of the building.

The terraced house with two floors is located near to the junction with Berry Close, close to local shops and public transport.

A pensioner tragically died in the fire

On the first floor there is three bedrooms and a bathroom and on the ground floor there is a reception room and a kitchen. The house also has a front and back garden.

Devastatingly, the homeowner – 77-year-old Martin Patten – was killed in the fire alongside his dog Jolly in February.

At the time, family friend Lynne Berry, set out on a mission to raise £35,000 to help rebuild the home which is "barely a shell".

But the fundraiser was cancelled after she received online abuse.

The house will be auctioned on Thursday, December 2.

Just last month, a grim studio flat in central London that was left in a similar condition went on the market for £250,000.

And for that enormous sum its owner would get a pad the size of an average single-car garage.

Even the estate agent's description fairly represents the gaff, calling it "run down and in disrepair".

But the property definitely had potential. A glimmer of hope lies in the fact that other similar studios in the block reach a tidy sum of £325,000.

The tired flat is being marketed on Rightmove by central London agents Frank Harris & Co, but even they admit it is in dire need of some renovation.

Pictures show what appears to be smoke damage with every room appearing blackened and charred.

In June, a team of estate agents went viral for their honest advert for a fire-torched house with an almost identical price tag to the one in Cowley.

The three-bed terrace home was used by previous owners as a cannabis factory, with the hypothesis being that the hydroponic lights sparked a blaze.

Several rooms are severely smoke damaged while the bathtub appears to have melted.

Previous : British surfer who doesn’t want to be remembered as ‘the guy that broke his back’
Next : Inside the only place in Britain where villagers own pub, library and shop