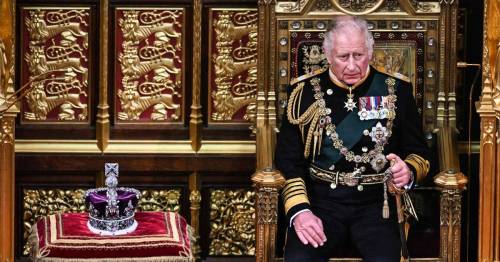 Amid all the pomp and circumstance, it was the enduring image of Prince Charles staring solemnly at the monarch’s bejewelled crown that brought home the enormity of the occasion.

In what must surely be considered one of the defining moments of his life so far, the Prince of Wales today came as close as he has ever been to the role he was born to do.

Standing in for the Queen at the 11th hour at the State Opening of Parliament, those gathered in the House of Lords and the millions around the world who will view the most poignant of images from the day, bore witness to a truly historic moment.

Her Majesty, only absent for only the third time in her illustrious 70 year reign with the previous two in 1959, and 1963, when she was pregnant with sons Andrew and Edward, was once again was forced to recognise her dwindling physical capabilities.

Plagued with ongoing mobility problems, as any other 96-year-old would likely be, the Queen does, I am told by those close to her, remain “absolutely pin sharp” and determined as ever to carry on the role she swore on oath she would serve out for life.

Prince Charles, Camilla and Prince William proceed behind the Imperial State Crown through the Royal Gallery
(

But far from passing on one’s excuses for regretfully missing a Remembrance Day Service or a garden party to thank the great and the good, normally such treasured mainstays of her calendar, her vacant position represents a true changing of the guard.

It was the day where everything changed and then again, arguably, not much at all.

Charles sat not on the sovereign’s throne, which had been removed, but on the consort’s throne, which used to be occupied by his father, the Duke of Edinburgh, and which Charles had used before.

The heir has accompanied his mother to the engagement in recent years, but this time in the grand pantomime of the event was elevated to a speaking role.

While a space remained next to him, where the Queen’s missing throne is usually located, under the opulent canopy, Charles gaze locked forward at the monarch’s Imperial State Crown in front on a velvet cushion.

Taking on the head of state’s major constitutional duty for the first time, Charles delivered the speech in the third person, using “Her Majesty’s Government”.

While the occasion will be remembered as a symbolic and significant shift in his responsibilities as a future monarch, what was conceivably more surprising to many was the inclusion of Prince William, attending the event for the first time.

Already a trusted lieutenant of the Queen and his father, it was a subtle move for the man who will also one day be king.

For his part, William has already been working hard in the background to shape his own destiny. Scarred by the recent backlash from his royal tour of the Caribbean with wife Kate, he has begun a process of developing the ‘Cambridge Way’, choosing a team of advisors who share his vision with what being a modern monarch entails.

Charles has often been realistic in accepting his reign most likely will be short-lived in comparable terms to his ancestors and is fully supportive of William being his understudy and learning the ropes with him in order to shore up their futures.

Again, in another moment of incredible significance, the history books suggest the only time a Prince of Wales has previously read the monarch’s speech was in the Regency of 1811-20 when the future George IV read the “Prince Regent’s Speech”.

The Queen during the State Opening of Parliament in 2019
(

We may be stopping short of a regency in practice, where Charles is the sovereign in all but name, but it is clear both her heirs in this moment have not only been handed more responsibility but, as she said recently herself, “in the fullness of time” are prepared for a smooth transition towards the future when she is no longer here.

William is also emerging as a trusted lieutenant of the Queen, especially over the last couple of years.

With the ongoing Sussex saga and the tawdry scandal surrounding his uncle Prince Andrew, William has been involved in top-level conversations regarding their futures, so it shows it is not just Charles but the Duke of Cambridge also being prepared for kingship.

The Queen’s dedication to duty continues unabated but the stark reality of what the future looks like must now be recognised by all around her.

Quite how this latest absence will affect Her Majesty’s plans to attend her Platinum Jubilee celebrations remains to be seen.

Her frailty may have caught up with her on this occasion but as she showed when she mustered the strength to attend the memorial service for her beloved late husband Prince Philip, the Queen will no doubt dig deep to be present.

Unlikely to be repeated in history, what a shame it would be for her to have to take a back seat on what promises to be an exceptional festival of thanks for someone who has given so much to so many.

Previous : Camilla’s ‘anxiety signal’ led to Charles’s nerves during Queen’s Speech, says expert
Next : Russia warns nuclear weapon use will be justified if there is an ‘existential threat’ – World News