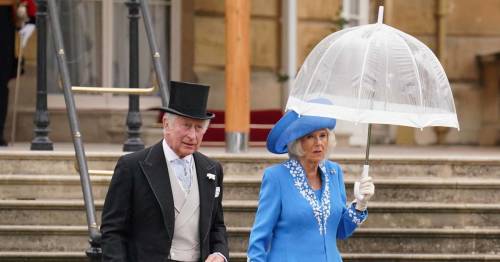 Prince Charles took the place of the Queen once again today to host Buckingham Palace's first garden party since the pandemic.

It comes a day after Charles also stepped in for his mother, who continues to suffer from mobility problems, at the State Opening of Parliament and read the Queen's speech for the first time ever.

This afternoon, the prince was joined by his wife Camilla and sister Princess Anne as they braved London's wet weather to greet the guests who had been invited to the first party of the season.

As is tradition, the royal group appeared on the steps of the palace and the National Anthem played before they mingled with those assembled.

Last week, it was announced that the monarch, 96, would miss the garden party season and that other members of the Royal Family would instead attend.

A spokesman said: “Her Majesty the Queen will be represented by other members of the royal family at this year’s garden parties, with details on attendance to be confirmed in due course.”

This year's parties, which take place at Buckingham Palace and the Palace of Holyroodhouse in Edinburgh, will celebrate the Queen's Platinum Jubilee and those invited are guests who have been deemed to have made a positive contribution to their communities.

Charles shakes hands with some of the guests
(

Camilla smiles as she mingles with the guests
(

The Queen has missed a number of major events this year – including the State Opening of Parliament and the Commonwealth Day service.

But she has been carrying out virtual engagements and her other duties.

Courtiers have since suggested the monarch should not be expected at any public events in the future ahead of time and will confirm on the day.

Princess Anne was also at the garden party today
(

In just a few weeks, the Platinum Jubilee bank holiday weekend will get underway, celebrating the nation’s longest-reigning head of state’s 70 years on the throne.

Festivities include Trooping the Colour, beacon lighting, a service of thanksgiving, the Epsom Derby, a pop concert at Buckingham Palace, and a spectacular Jubilee Pageant on the streets of London.

It has not yet been confirmed how many of the high-profile events the Queen will be able to attend, but is especially keen to attend the Derby it is understood.

A royal source told The Mirror: "There will certainly be fears over whether Her Majesty will be able to make any events for her Jubilee celebrations or have to really choose her battles.

"She will do her best but her health must come first and she is by now used to listening to the advice of her doctors as well as knowing her own limits."