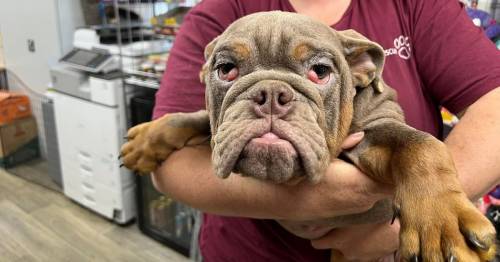 An animal charity has pleaded with Brits to stop buying bulldogs after they've experienced their 'worst ever' intake of sick pooches.

It says it has seen a catalogue of breeding related illnesses – amid urgent pleas from experts to stop buying trendy dogs.

The founder said if things don't change, it will support a call to ban the breed all together.

Two adults and eight puppies were the "worst bred" intake of dogs it had ever seen.

Fresh calls from the Royal Veterinary College urged people not to buy flat-faced dogs, including bulldogs.

The college's research said urgent action is needed due to increasing cases of breathing problems, skin and ear diseases and eye disorders due to breeding.

Many of these illnesses, including cherry eye and significant issues with their legs, spines and hips were seen in the family taken in by Hope Rescue.

The charity says the dogs' issues mean they will never live normal lives, making it more difficult for them to ever find loving homes.

Hope Rescue's founder Vanessa Waddon said: "It’s hard for us not to be sympathetic with calls to ban the breed, especially after seeing the horrendous condition of this latest intake.

"If things don’t change, we will be joining those calls.

"We cannot continue to take in these dogs and witness their suffering.”

Hope Rescue, which is based in Llanharan, Wales, received the ten bulldogs on June 14 after being seized by a local authority in Wales on welfare grounds.

The dogs had many health conditions as a result of low welfare breeding and inherent breed-related conditions, the charity said.

They also face breathing issues due to their flat faces.

Researchers say urgent action is needed to protect the breed
(

The health issues Hope Rescue can “fix” will still only ever be ‘improvements’ meaning the animals will never fully function as “normal” dogs and lifetime management will be essential.

This can cause further issues down the line, when the charity comes to rehoming these dogs – potentially risking them finding forever homes.

Just a day after the dogs were signed into Hope Rescue's care, results from a new study from the Royal Veterinary College were revealed, suggesting urgent action is required.

The Royal Veterinary College are urging the public to think twice before buying a flat-faced breed and discourages breeding and purchasing of animals with extreme configurations.

The college said: "Sadly, many of the breed’s problematic characteristics such as a very flat face, deep facial skin folds and noisy breathing are still often perceived by many people as ‘normal’ or even ‘desirable’ novelties – rather than major welfare issues."

The findings indicate that urgent action is required to reduce the high rate of health issues related to extreme body shape currently seen in English Bulldogs if the future of the breed is to be protected.

One of the dogs was found to have a bad tail
(

Hope Rescue's own stance supports this – and say it’s integral for buyers to change their buying behaviours or risk this breed continuing to endure a lifetime of suffering.

Sara Rosser, head of welfare, said: “We’re pretty tough at Hope Rescue, but our rescue-hardened hearts have been well and truly broken by these dogs."

She added: “It’s difficult for us to fundraise right now due to the ongoing cost-of-living crisis but if the public could help in anyway, helping us to cover our vet fees, we’d be hugely grateful.”

Previous : Prince Andrew made ‘snickering noises’ while having sex with Virginia Giuffre, she says
Next : Burger King selling Chicken and Vegan Royales for £1.99 all week for Platinum Jubilee