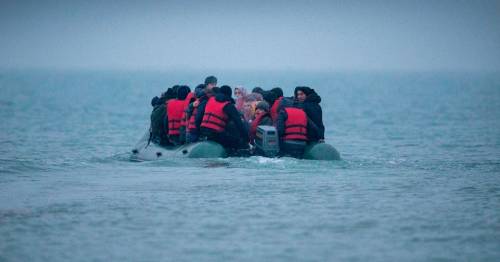 It was previously reported that one child and five women lost their lives in the disaster on Wednesday, with rescuers picking up just two survivors.

The pair indicated that their fragile dingy, which has been described as a 'floating death trap', had been hit by a container ship.

Mr Darmanin said the boat had 'deflated like an inflatable garden pool' by the time rescuers arrived.

Four people smugglers were arrested in relation to the deaths on Wednesday and face manslaughter charges.

French authorities said on Thursday morning a fifth suspect had been arrested.

It comes after French police were pictured watching on from a pick-up as children were put on a boat for a Channel crossing on Wednesday.

The two officers did nothing to stop the dinghy setting off near the town of Wimereux just after 8am.

Mercifully, six-and-a-half hours later it arrived on the coast near Dover, where Border Force officials were there to help.

The group survived the journey on the day at least 27 other desperate migrants died attempting the same crossing.

French police sit by as migrants enter the Channel on Wednesday, with the group mercifully surviving the crossing
(

The doomed boat was carrying mainly unidentified Iraqi Kurds and Somalians who had paid the equivalent of up to £6,000 each for a passage to England.

Very few of them were wearing life jackets, and most are thought to have succumbed to hypothermia in the extremely cold water.

Autopsies will take place in Lille ‘over the next few days’, said Carole Etienne, the city’s public prosecutor, who is leading a criminal enquiry into the tragedy.

French police watching the Channel at Wimereux, north of Boulogne, on Thursday morning
(

Bernard Barron, president of the SNSM rescue service in Calais, spoke of ‘group murder’ as he described how the ‘floating death trap’ that was meant to contain a maximum of 10 people ‘was completely deflated when we found it’.

Mr Barron said: "Migrants are forced into the boat, and their feet are in water and fuel. These are unimaginable conditions.

"Often only women and children have life jackets, and these boats don't have navigation lights or radar receivers."

Channel boat crossings have soared over the past two years

Charles Devos, also one of the first SNSM rescuers to reach the victims, said: "We’ve seen the boats becoming more and more overcrowded.

"The inflatables are only designed for 10 people, but more than 50 have been packed on board, turning them into floating death traps.

"We always thought that, one day or another, they were going to collide with a container ship or a ferry."

The rescuers believe the boat left Loon-Plage, near Dunkirk, on Wednesday morning and collided with the container ship at the limit of French territorial waters.

The two men ‘made a miracle escape’, said Mr Devos, but their condition in hospital in Calais was said to be ‘extremely serious’.

In was the deadliest ever incident of its kind ever, and led to a fisherman sounding the alarm at around 2pm after he saw corpses floating in the sea.

Those arrested – whose names have not been released – are all men who were stopped as they fled towards the Belgium border on Wednesday night.

They are expected to appear before local magistrates this week for a fast track trial.

All are thought to be part of a criminal gang and they face charges of ‘manslaughter’ and ‘assistance with illegal immigration in an organised gang’.

Jean-Marc Puissesseau, president of the ports of Calais and Boulogne, also accused the smugglers of being murderers, saying: ‘The poor migrants spent months and months coming here, and died so close to their dream.’

The tragedy happened as migrants rushed to make the dangerous crossing ahead of winter storms which are expected to sweep in this weekend.

These included about 40 who were allowed into the sea near Boulogne by a French police car with at least two officers inside appearing to do nothing. They landed at around 2.45pm in Dungeness.

President Emmanuel Macron said France would not allow the Channel to become a ‘cemetery’.

Prime Minister Boris Johnson said people smuggling gangs were “literally getting away with murder” and insisted the latest tragedy was not a sign that his own plans were failing.

He has now called on France to let British ships to patrol French beaches.

But Calais MP Pierre-Henri Dumont said the move would not work as it would take 'thousands of people' to monitor the French shoreline.

He added: "There is also a question of sovereignty – I'm not sure the British people would accept it the other way round, with the French army patrolling the British shore."