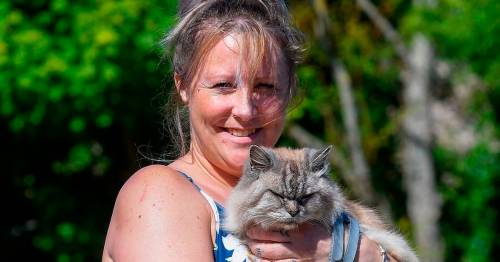 A pet owner whose beloved cat went missing 10 years ago was stunned when her moggy was reunited with her – after being found 250 miles away.

Donna Gallacher, 40, last saw her precious British shorthair-cross Chubby, when he went missing in 2012 from her home in Weymouth, Dorset.

The pet lover, who had reared Chubby since he was a kitten, had worked tirelessly to track down her beloved feline.

However, after the 10 years had past, she all but given up hope finding the microchipped moggy.

But, remarkably, a Manchester vet phoned to say dishevelled Chubbs had been found last month in Wigan.

The cat owner said it was a "surreal" moment when she found out Chubbs would be returning to her, adding the cat was "so happy" to be home finally.

Donna admitted: "It was overwhelming. It hasn't quite sunk in. It's just surreal. I've been looking for him for ten years.

"For him to just all of a sudden be reunited with me, it's a lot to take in.

"He is so happy to be home. I pick him up and he just purrs so much.

"Since he's realised he's home and he's safe, he's spread out and made himself at home. He's loving life."

Donna said when Chubbs suddenly went missing in 2012, she was left distraught and did everything she could to get him back.

She said: "I put posters up everywhere and put flyers through people's letterboxes all around my immediate area, and I put ads in the local paper and it was on social media.

"I continued to keep updating it and sharing it, and I've done that for years.

"You drive past houses, and you look in windows, and you think could he be in there?

"What saddened me is that I thought that if I ever saw him again, it would be when he was not very well – because he would have to go to a vet."

Ten years later, she got a call to say that the feline would be coming home after he was found hundreds of miles away in Manchester – leaving her stunned.

Chubbs the cat is happy as Larry
(

She said: "I had a phone call from my mum saying Chubbs is on his way home, and I thought, "What? Oh my god!"

"A lady had seen him previously by a school and thought 'He doesn't look too good today, and he started wandering into the road, into traffic.'

"He was very, very neglected. He was flea-ridden, skin and bones. So he couldn't fend for himself.

"She stopped the car, picked him up and took him to the vets. They could not believe it when they found out how far away he was.

"The lady looked him up on Facebook and saw all the messages and posts I'd put up and realised 'He's a really loved cat, he's really missed.'"

Donna says she will be making up for the years she's missed out on with Chubby while he's been gone.

She said: "He is going to be spoilt rotten and live out his years in peace and comfort."

Previous : Gutted punter’s “a*** fell out” as he misses out on £9k by cashing out Royal Ascot bet
Next : Mirror campaigner Max Johnson sends message of hope to tot waiting for heart transplant