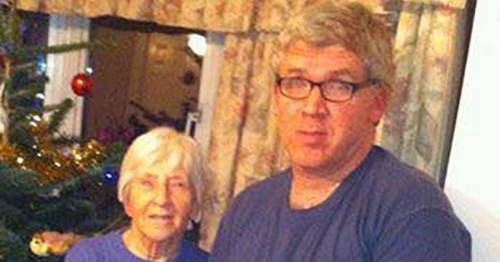 A carer has avoided jail after falling asleep at the wheel and crashing his car, killing his elderly mother in the passenger seat.

Mark Harrison stood before the judge beside a packed public gallery where his four brothers and extended family watched on, following his mother's tragic death.

The courtroom heard how the now-53-year-old had been driving through country lanes with his 90-year-old mother Olive Harrison when he hit a BMW head-on, leading to the discovery that he had drifted onto the wrong side of the road.

Prosecuting, Jonathan Stone said: "This case is regarding the tragic death of Olive Harrison. On June 29, 2020, Ms Harrison was in a car, a Citroen C3, driven by her youngest son and full-time carer, the defendant.

"Harrison had taken his mum on a leisurely drive towards the end of lockdown. She was the front-seat passenger in a car collision with a BMW. The final resting position of the Citroen was across the road.

"The other driver was not to blame for this incident in any way, shape, or form. The Citroen was driving faster than the BMW but wasn't speeding. The case is all about the car drifting onto the other side of the road."

Mark Harrison and his mother Olive
(

The court heard that when Harrison was taken in by police for questioning, he claimed 'he could only remember being hit'
(

A court heard how, following the crash on Longdown Hill, Kimble, Aylesbury, Bucks., police discovered both drivers passed drug and alcohol examinations, that weather conditions were good, and both cars were functioning perfectly and within the speed limit.

The prosecutor added: "The BMW driver got out of the car and challenged the defendant, but there was no reply. Other drivers helped Ms Harrison out of the car. She said she couldn't breathe and was very confused."

Following the crash, Ms Harrison was rushed to hospital where she tragically died from multiple injuries.

The court heard that when Mr Harrison was taken in by police for questioning, he claimed that "he could only remember being hit".

He told police: "I was driving and then suddenly the BMW was there. It all happened so fast."

Harrison also told police he could "fall asleep at the drop of a hat."

The court heard how Harrison had not applied the brakes until the last second of the crash.

Judge Frances Sheridan, presiding over the case, interjected: "He didn't see the vehicle because he fell asleep. He should've seen the vehicle."

Harrison, previously of no convictions and with a clean driving record, admitted one count of death by careless driving in a previous court hearing.

Statements to the court from various family members, including Harrison's four brothers, his niece and nephew, claimed that he had expressed no remorse after the accident, and hadn't told his family of the crash until hours later.

The court heard how he had since been exiled from his family.

Defending, Laban Leake said: "Let me first say how tragic this case is. He gave an early guilty plea, and this is an expression of absolute remorse."

A report from probation said Mr Harrison is clearly truly sorry for what happened on that day.

"No one sets out to commit an offence like this," it said.

"He has been a carer for his mother for a number of years – his mother's welfare was imminent as his concern."

The barrister told the judge that a sleep expert had suggested that Harrison had suffered from a 'micro-sleep', where he was aware enough of his surroundings but not able to respond in time.

"If he felt too tired or unsafe to drive, he wouldn't have driven. This is not a case of a driver feeling tired and nodding off – it is that the micro-sleep crept up, and then dissipated," they added.

Sentencing, judge Frances Sheridan said: "Olive was frail and elderly, but she was a jolly-good egg – she was loved by everybody in equal measure.

"Throughout Covid-19 the defendant, Mark Harrison, was his mother's carer. He found the role emotionally exhausting, waking up throughout the night to care for her.

"He took his mother for a drive, even though he knew he could fall asleep at the drop of a hat. He shouldn't have been driving. It was a rotten call, and the worst mistake of your life.

"You drove when you shouldn't have as you were trying to give her a break from lockdown.

"I think the speculation from the expert is bang on – you fell asleep at the wheel. You were her carer and you were exhausted, and nobody has challenged your dedication to being a carer.

"You delude yourself if you think your brothers do not have a resentment against you.

"Their perception was that you only thought about your vehicle and your own injuries, and I hope they were wrong about that. People react bizarrely to shock.

"And that's it – you knew you shouldn't have been driving. You were taking your mum for a spin, you dozed off, and you killed her.

"You drifted onto the wrong side of the road – I find this to be careless driving just short of dangerous.

"I believe your remorse as genuine, and I accept that you regret the pain you have caused for your family."

Addressing the defendant and the public gallery, he said: "Remember her fondly. this family does not need to be a broken one."

Harrison, of Taunton, Somerset, was sentenced in Aylesbury Crown Court to 10 months imprisonment, suspended for 18 months.

He was also handed a five-year driving disqualification, where he is not permitted to own a driving license unless he can be proven fit to drive.

He was also ordered to undertake a separate extended driving test, and his case was referred onto the Secretary of State by the judge.