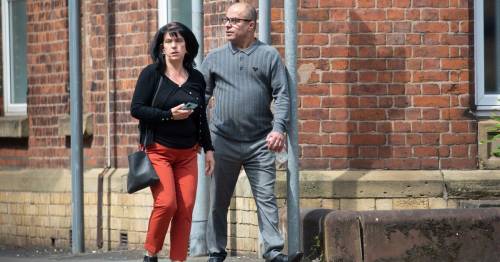 A car wash worker not legally allowed to drive crashed a customer's classic Mercedes and claimed he wrote off the classic car after trying to save the life of a mouse.

But he crashed the valuable rare and pristine 1992 550E Merc that owner Kevin Murphy, 77, described as 'a cherished and prized possession'.

The Manchester Evening News reportd that Warrington Magistrates Court heard he took it for a 90-minute spin from the car wash in Runcorn to his home in Stockport and back again.

He ran into trouble just five miles short of his return to the town.

The car was crashed following the worker's 90 minute drive
(

In subsequent police interviews Mr Abas claimed the crash happened when he swerved to avoid a mouse in the road.

The court heard thousands of pounds worth of 'significant' damage was caused to the car.

Mr Murphy returned to pick up the vehicle – one of only 29 models imported to the UK – only to find it had virtually been written off in the smash, with one wheel virtually horizontal. Police inquiries revealed Abas had not passed a UK driving test.

In a statement, property landlord Mr Murphy said the 30-year-old blue car, which has around 26,000 miles on the clock, was usually chauffeur driven and added: ''It was a cherished and prized possession. Every serviced piece of work was always done on it by Mercedes and I devoted a lot of my effort to keeping the car in pristine condition.

"When I learned of the damage I was incredibly upset. While I do not feel vulnerable or intimidated as a result of this, I am now incredibly cautious about who I trust my vehicles with.

"With regards to any other changes to my quality of life, I had to devote time to locate another vehicle to obtain spare parts from. This is a very time consuming and difficult process. I am worried that the car will be a write-off.

"Currently, I am not at a loss as no work has been carried out but I expect to pay around £5,000 of my own money, not insurance, to have the vehicle fully repaired."

At Warrington magistrates' court, Abas pleaded guilty to aggravated vehicle taking and driving without a license or insurance, and was banned from driving for 12 months. A separate charge of driving without due care and attention was withdrawn. Despite the smash on March 13 Abas and Mr Murphy were said to be on 'good terms'.

Angela Blackmore, prosecuting, said Mr Murphy had regularly dropped off his Mercedes at the Runcorn carwash, where valets can cost up to £60. The businessman owns the land where the car wash is based and did not consent to any driving of the vehicle 'other than around the courtyard of where the car wash is', she said.

Mrs Blackmore said: "He said he had been the owner of the car for 30 years and he described it as a classic. It was in immaculate condition and usually chauffeur driven. He dropped the car off with the keys to the car valeting shop on Chester Road, Runcorn.

|He said he is the landlord of the land where the business is. He says he is friendly with everyone who works there but he wouldn't consent for anyone to drive the vehicle other than in the courtyard where the valet shop is."

A police report revealed skid marks on the pavement and a grass verge along Clifton Road, Runcorn, which changed direction once reaching a lamp post, crossing the road and onto the other pavement then along another grass verge before crashing into a wall.

"The length of the skid marks from start to finish was around 80m," the prosecutor said. The damage to the vehicle was significant. The near-side wheel arch was nearly horizontal with the ground." Abas was found lying beside the car and was treated by paramedics, Mrs Blackmore added.

She said: "During interview, the defendant said the vehicle had been dropped off to the car wash and he drove it to Stockport and back. He only had a provisional driving license. In relation to the crash, he stated a mouse ran on the road and he started to swerve to avoid it."

In mitigating for Abas, who had no previous convictions, defence lawyer Philip Green said: "He shows a lot of remorse and this appears to be genuine remorse. "Happily, notwithstanding the offences, the victim in this case and the defendant remain on good terms.

He is not employed at the same car wash but he was offered his job back. He has decided at this stage not to accept the offer of employment.”

Abas was sentenced to 12 weeks in prison, suspended for a year.

District Judge Mark Hadfield told him: ''I am afraid I do not accept that you thought you had consent of the owner of the vehicle – particularly when you intended to drive from Runcorn to your home in Stockport.

"Having taken the car unlawfully you lost control and crashed it causing what is clearly severe damage to the motor vehicle – a vehicle which was clearly cherished by its owner and probably has a value to him more than the vehicle's monetary value."

Abas was ordered to complete 150 hours of unpaid work and pay £213 in costs and a victim surcharge. No order for compensation was made.