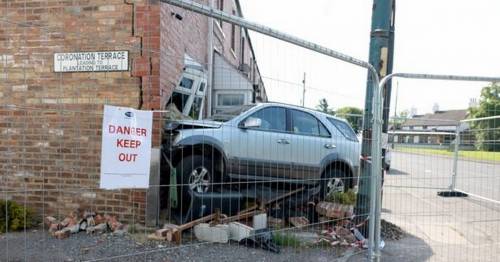 Shocking images have emerged showing a car wedged into the front of a house after a horror crash that has left two in hospital.

Emergency services were called to reports of a collision involving one vehicle in Fir Tree, County Durham, around 9am on Monday.

Durham Police have said it is believed that the driver of a blue Kia Sorrento lost control and crashed into the front of the house.

An image from the scene shows the car had ploughed straight into the bay window of the terraced home, reports Chronicle Live.

The North East Ambulance Service said they dispatched one ambulance crew and took two people to the University Hospital of North Durham for further treatment.

Emergency services were called to reports of a collision involving one vehicle in Fir Tree, County Durham, around 9am on Monday.

As of Thursday morning, the car remains at the scene however it is fenced off to prevent any further injury. The pictures show the car has crashed through the front window causing structural damage to the property.

A spokeswoman for Durham Constabulary said: "Police were called shortly after 9am today (June 13) to reports of a one vehicle collision on Harperley Terrace, Fir Tree, Crook.

"It is believed the vehicle, a blue Kia Sorrento lost control and crashed into a house.

"The driver was taken to hospital as a precaution and thankfully nobody else was injured."

A North East Ambulance Service spokesperson said: "We were called to reports of a road traffic collision in Harperley Terrace in Fir Tree at 9:08 on Monday morning.

"We dispatched one ambulance crew and transported two patients to University Hospital of North Durham for further treatment."

Paul Burr, Durham County Council's building and facilities maintenance manager, said “We have made the building and surrounding area safe.

“Our officers will monitor it to ensure it remains secure until staff from the car owner’s insurance company recover the car and repairs are carried out to the property.”

Previous : Experts fume as Royal Ascot winner The Ridler keeps race after cutting across rivals
Next : Mum’s piercing scream of terror as she wakes up to find ‘machete-wielding man’ in room