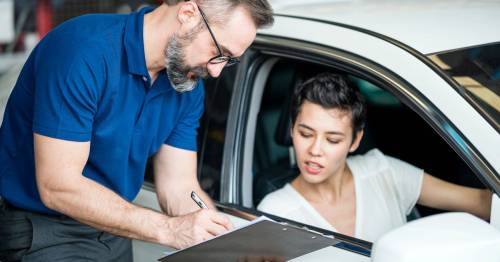 Drivers are set to save £50 a year on car insurance due to government scrapping a Brexit law that allowed claims for mobility scooters and ride-on lawn mowers.

British drivers' insurance prices were due to rise this year because Brexit meant the odd law had to be made reality in Britain – despite all other European countries scrapping it.

The law would meant anyone could bring an insurance claim against vehicles like mobility scooters, ride-on lawn mowers and golf buggies on private land.

Normally these vehicles would not need to buy motor insurance , which is only required for vehicles meant to go on the road.

But claims made against these vehicles would have driven up car insurance premiums by £50 a year per motorist, according to government figures.

This has already started to happen.

The European Parliament said the idea was "absurd overregulation" in June 2021 and that it would ditch the whole thing.

Because Britain left the European Union , if we want to get rid of the rule too then we have to pass our own law, as new European rulings won't apply to us.

But in a bit of good news for drivers, that will happen this week, as a law called the Motor Vehicles (Compulsory Insurance) Bill will get royal assent.

The British Insurance Brokers' Association (Biba) trade body has been lobbying for the law to be changed for six years.

Biba executive director Graeme Trudgill said: "This is one of the longest-running campaign issues for Biba and so we are delighted that, with the passing of this bill, the issue is finally resolved.

Why were car insurance premiums due to rise?

The odd story began in 2007 when a Slovenian farm worker called Damijan Vnuk was knocked off a ladder by a tractor on private land and injured.

He was unable to claim damages from the tractor's insurer, and the case rumbled through the Slovenian courts before ending up in the European Court of Justice in 2014.

That established a Europe-wide rule that motor insurance was needed for any vehicle, anywhere – not just on roads.

Each country in the European Union technically then had to write that into their own laws. Due to Brexit Britain never did, meaning if you own something like a mobility scooter you don't actually need to insure it.

But if you get injured by any vehicle on private land in Britain you would still have been able to bring an insurance claim under the Vnuk legislation that is now being scrapped.

That's because in June 2019 another court case, Lewis vs Tindale, said the UK state had to pay these claims even after Brexit.

The part of the state that pays these claims is the Motor Insurers' Bureau (MIB) , which is funded by insurers and pays claims where the insurer can't be tracked down.

But the ultimate cost is picked up by motorists through their premiums.