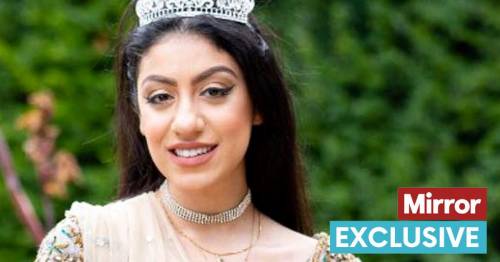 When Anglee Kumar steps on stage next month in her quest to reach the Miss Universe finals, she will already be a winner in the hearts of millions.

Not for her looks, as beautiful as she is – but for qualities way beyond skin deep. For her courage and determination.

Because Anglee will be wearing a wig after losing the waist-length flowing hair she loved so much following chemotherapy for her stage four cancer.

Her eyelashes and eyebrows went along with it. Her nails turned black.

But when she takes part in the Miss Universe GB stage of the pageant, she believes she will be more radiant than ever.

“When I am on that stage, I will feel empowered, strong and beautiful,” says Anglee, 27.

Anglee Kumar believes she will be more radiant than eve

She is going for the Miss Universe title

“Yes, I will be wearing a wig, but my confidence at what I have overcome will shine through.

“I have been through so much and now I want to be a voice for other young women living with cancer.

"I want them to know, help is out there, you can get better and have a fulfilling life again.”

But it has been an arduous journey back to the self-confidence now glowing in Anglee – with the incredible support of cancer charities like Macmillan.

In February 2021, the gym-loving paralegal, who has a Masters in Law, began having heart palpitations and discomfort in her chest.

She went to A&E and was told it was anxiety and she should cut down caffeine and alcohol.

Yet Anglee believed it was worse than that. She kept pushing for tests but it was months before her cancer was diagnosed.

A biopsy found four lesions in the top of her diaphragm and lungs. And in November 2021, she was diagnosed with stage four non-Hodgkin lymphoma.

She says: “My world came crashing down. I knew something was wrong, but I never expected cancer.

She is wearing a wig for the finals

Anglee getting her Masters in law in Westminster, London
(

"I was devastated and didn’t know how I was going to get through it.”

Then the gruelling chemotherapy began, making her so ill she was repeatedly hospitalised.

Anglee – who lives in London with parents Mala, 47, and Mohan, 54, and three siblings including her twin sister Tina – says: “I felt weak, sick and disgusting.

“I was traumatised by what was happening to me. I cried every day, I didn’t want to leave my room. I couldn’t even speak to friends.”

And for Anglee, losing the beautiful hair she felt was such a part of her identity was shattering.

She says: “I couldn’t face it. No matter how much you try to mentally prepare for it, you can’t. Mum would pick it up off the floor.

"I was too scared to brush it. I eventually had two strands on either side of my head, but I didn’t want to cut them off. Then my mum sat me down and said it was time. So we did it. It was heartbreaking.

“I stopped putting on make-up and didn’t care how I looked.”

Another struggle for Anglee was having to keep her cancer to herself.

“I come from a small, very close-minded Indian/Afghan community in which no young person has ever had cancer, so I was asked to keep it secret. They believe women who are ill will struggle to find a husband, so it is a taboo topic. I had two Instagram accounts – one where I talked about it and one where I didn’t.”

Now she is determined to break taboos for other young sufferers. “Eventually I said to my parents, ‘I’m speaking out. I’m doing this for the people who are not OK.’

"I want to break stereotypes so people can get help which is a huge part of your recovery.”

As her self-confidence slowly edged back, she looked to a long-held dream of competing in Miss Universe one day.

“Treatment was the darkest time of my life, but through it all grew this sense of wanting to use my experience to help others. I believe my cancer got to stage four as I wasn’t taken seriously by doctors for such a long time. Because I’m young and female I had to fight for tests. I don’t want other young sufferers to go through that.

“Having cancer is in no way attractive, so I thought having a glamorous platform like Miss Universe behind me would help me get my story heard.

Anglee wants to encourage other women

“I kept telling myself if I can push myself to be brave, then I can make a difference. So I entered the competition and used it to get my motivation and my confidence back.” But first Anglee had to pull herself out of depression. She turned to Macmillan Cancer Support.

“They got me therapy straight away. Getting a lot of things off my chest helped immensely.” The first step towards her dream was finding a wig like her old hair. “I’m forever grateful to my parents for helping me pay for my wig. It cost £2,000 but really helped with my confidence. It is long and dark, with highlights, just like the hair I lost.”

Another cancer support charity – Look Good, Feel Better – helped Anglee with make-up and nail tutorials, showing her how to cover the chemo effects. She said: “They are an amazing charity. I did a nail tutorial with them that showed me how to cover the damage. They sent me a gift with make-up and creams. I learned how to draw on my eyebrows and apply fake eyelashes.”

In February, Anglee finished her final chemo session and, after two scans, was told she is in remission.

She said: “It was the most amazing moment. Hearing I didn’t need any more chemo was the very best thing in the world.” Shortly after the good news, Anglee heard she had made the Miss Universe GB finals.

“I felt euphoric and like I had come full circle. It really has given me back my confidence and made me feel beautiful again.”

Now she is preparing for the finals between July 7 and 9 in South Wales – and has her eye on an the biggest prize. She said: “Great Britain has never won the international Miss Universe in the competition’s history. I want to bring home the crown.”

Previous : Tyson Fury’s secret ingredient to a good fight is a jam roly-poly during training
Next : Ed Sheeran lookalike moved to safety during gig after fans surrounded him for selfies