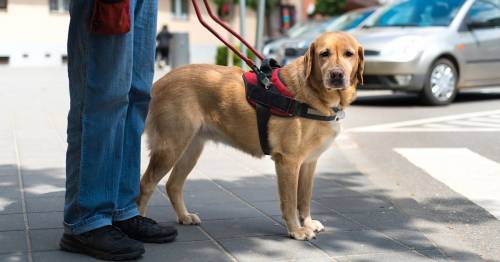 A taxi driver deserted a blind man in the 'middle of nowhere' after he refused to hand over an additional charge for his guide dog, a court heard.

Zafar Ali told Nicholas Mills to pay an extra £2 for bringing his golden labrador Percy with him on the taxi journey back home, Birmingham Live reports.

When the disabled passenger refused, the taxi-man kicked him out of his grey Mercedes Saloon, deserting him on the side of the road at night.

Mr Mills, who is 'completely blind', was only able to make it back to his Stourbridge home in Dudley after a kind passerby offered him a lift.

Ali has now been handed a hefty financial penalty – almost £1,900 for refusing to take Mr Mills home over the £2 quibble.

He faces losing his licence and will be brought before a Dudley Council committee later this year after he failed to turn up for his trial at Dudley Magistrates' Court on Friday (October 8).

Ali – who worked for Stourbridge-based A2B Falcon Elite at the time – picked up his customer from Hagley's The King Arthur just before 10pm on August 8, 2019.

Mr Mills insisted the fare should be £6 as it is illegal to charge extra for guide dogs.

The 'aggressive' driver confirmed with a colleague there was no extra charge but continued with his demands before proclaiming 'right get out'.

He then abandoned the customer in Racecourse Lane, near the Greyhound pub.

In a witness statement, Mr Mills said he felt uncomfortable as Ali gave the impression he 'didn't like dogs', told him to stop Percy 'from looking at him' and 'moaned' about the hound throughout the journey.

He said: "As soon as my friend walked away, he opened both of the front door windows and said "stop your dog from looking at me".

"I turned Percy's head towards me. I felt that the driver was being a bit hostile and had the impression he didn't like dogs."

He added: "I was told to get out of the car. I heard the driver tell the operator on the radio that I was refusing to pay the fare which wasn't true.

"I just didn't want to pay for the guide dog. Anyway, he stopped the car at the side of the road and told me to get out of the car.

"I did as he said. The drive drove off leaving me and my dog on the side of the road.

"I had no idea where I was. I knew that my dog wasn't familiar with that area and that is a real problem.

"My sight is non-existent. I cannot see at all. I cannot see shadows. I cannot even see glimpses of light. It is total blindness. I rely totally on my dog."

Tim Holder, prosecuting on behalf of the council, told the court Mr Mills was stranded in the 'middle of nowhere'.

The court also heard Mr Mills – who was 59 at the time – did complain to the taxi company but has still had no response from bosses two years on.

Ali was convicted in his absence of being a private hire vehicle driver who failed or refused to carry out booking for disabled person accompanied by assistance dog.

Previous : Share your senior dog photo of pooch in their golden years and you could win a prize
Next : Ghislaine Maxwell set to spend Christmas Day 60th birthday in prison as long trial looms