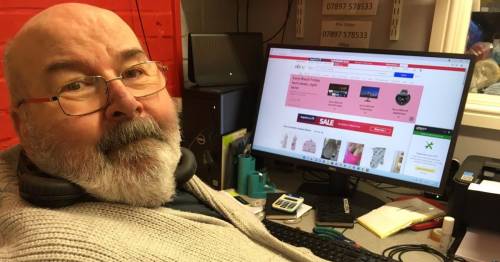 A businessman is facing ruin and having to make staff redundant because of what he claims is an eBay hacking scam.

Phil Green's Bags-n-Aprons business has successfully traded through eBay and other online platforms for over a decade.

But the Grimsby businessman was shocked to discover listed on his eBay account were Rolex watches, speedboats, bicycles and rare Pokemon cards.

Ebay immediately froze his account which meant he lost trade. But he says the firm also took money directly from his account totalling £14,000 to pay off people who had not received delivery of the items they had ordered and paid for.

The Nunsthorpe businessman was shocked to discover listed on his eBay account were Rolex watches, speedboats, bicycles and rare Pokemon cards
(

Phil's clients are normally nursing homes, play groups and retailers. But suddenly he found people from throughout the United States ordering expensive watches, speedboats and cycles.

One buyer paid out $1,120 for a Rolex watch but never received it and sent an angry message to Phil.

Another was furious that the Grimsby businessman was trying to sell a unique Pokemon card, which only the American collector owned.

The online market place normally works with a business adding items for sale on the site. When it is purchased the money goes to eBay and then they send it to the business, when there is confirmation of dispatch. If, for whatever reason, the item does not arrive or there is a complaint, it is registered with eBay who investigate why it was not delivered.

Rigorous checks are made on both sellers and buyers to ensure they are genuine.

But Phil said: "Bags-n-Aprons has been operating from the Nunsthorpe estate for some 11 years. We have sold our textiles on eBay for that length of time without trouble.

"Between 2pm and 8pm on November 4 our site was hacked by we believe an USA based hacker. We reported the hacking to eBay first thing on Friday November 5 and since then they have done almost nothing to help us.

"We later found eBay had debited our bank account by around £14,000 for charges but they were unable to state what charges."

He said: "They immediately blocked my account. There have been one or two sales but nothing like the volume we would normally be doing this time of year.

"They have tried to charge me for the items the hacker had posted on my listing. I have a direct debit so they can take normally, which is fine. But last week it was over £12,000 and this week it is £2,700.

"None of this is my fault. I can't see why I have been penalised like this. But I have had to lay off one member of staff and if nothing improves then I cannot carry on on and the other two staff will lose their jobs. I don't have enough money to pay the staff and rent. There is no likelihood of the situation improving.

"Ebay know it is not my fault, but froze my account. Surely when checks are done they must have realised I don't sell Rolex watches. One of them was paid for at $1,025 by a chap in Flushing, New York. We never had that. The hacker has got the money and legged it."

He added: "Someone got in touch asking why I was selling his Pokemon card. But it was a fraud. People are upset. They paid money and nothing arrived. I am getting abuse and it results in bad feedback.

"When all this is happening eBay recognised the account had been compromised but still took money from my account. They paid a buyer $1,125 and took it from my account and said it was my fault. It has been difficult enough with the pandemic without this.

"I just had a pacemaker fitted and this isn't doing my stress levels any good."

An eBay spokesman said an investigation is underway and could take a few days.