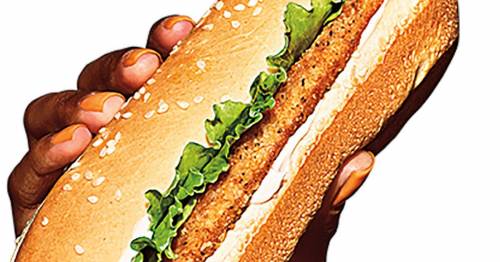 Burger King selling Chicken and Vegan Royales for £1.99 all week for Platinum Jubilee

Burger King is selling its Chicken and Vegan Royales for £1.99 all week – as a cheeky nod to the Queen's Platinum Jubilee .

The Burger King sandwiches contain breaded chicken or vegan chicken with lettuce and mayo in a sesame seed bun, and normally cost around £4.99.

To get the bargain sandwiches, customers have to go onto the Burger King app and download a voucher.

If you go into selected Burger King restaurants and show the voucher you get the money off.

However, the offer is not valid in Burger King branches in motorway service stations, airports, train stations and holiday parks.

The offer opens today and runs until June 5.

The Chicken Royale and Vegan Royale are on offer this week

The designs range from Beatles-inspired illustrations to Spice Girls references, and are meant to "capture the cultural melting pot of Great Britain over the years", Burger King said.

Fans can get their hands on a free Jubilee Crown in Burger King restaurants from June 1, as well as at parades across London and Windsor.

Burger King has announced plans to open 200 more restaurants in the UK by 2026.

The burger giant said it has “good visibility” in regards to where it wants to open new branches, but hasn't revealed where any new locations will be.

Burger King recorded a jump in sales in its latest annual report, with total revenues climbing by 68% in 2021 to £211.7million. Like-for-like sales were up by 46%.

The restaurant chain swung to a £33.4million operating profit for the year, compared with a £7.5million loss in 2020 when restaurants were forced to shut for months at a time due to the Covid pandemic.

The fried chicken chain has listed hundreds of locations on its website where it want to open new sites – with plans for more full-size restaurants and drive-thrus.

KFC also wants to open more travel hubs at airports and roadside stations, as well as “smallbox” sites that fit into 1,000 sqft in high pedestrian areas.