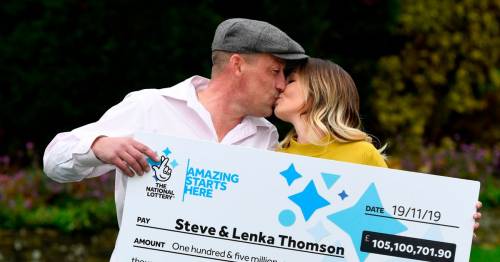 A builder who scooped a £105million Lotto jackpot could reportedly bag another £90 million over the next 20 years after investing a big chunk of his win.

Lotto winner Steve Thomson, 43, won the huge jackpot in 2019 and admits the win is still sinking in.

The millionaire has now been dubbed 'Mr Sensible' by friends after reportedly investing a chunk of his win with the Queen 's bank.

Steve and wife Lenka put "tens of millions" into a trust with Her Majesty's favoured firm Coutts & Co after the lucky win, reports say.

The cash invested in the couple's two separate trusts are invested in stocks, shares and property, it is reported.

A £30million investment could see them bag a staggering £90million over the next 20 years.

The couple celebrating their win
(

A friend told The Sun: "The truth is there has been massive pressure on Steve and Lenka since their amazing win.

“Dealing with that sort of money and planning for not only your children’s future, but generations to come, is a hard task."

In April it was reported that, after his win, Steve swapped his terraced house for a sprawling country estate – but promised to do all the DIY work himself.

Steve finally moved into the impressive pile his wife Lenka, 42, and three children more than a year after his 2019 win.

They were staying in their £150,000 three-bedroom home in Sesley, West Sussex during the wave of national lockdowns imposed amid the Covid pandemic.

But their new 14.5-acre estate, which boasts a swimming pool, tennis court and party barn, is seven times the size of an average UK property.

Previous : Zoom quarterly results top estimates as hybrid work boosts demand
Next : What would close during Covid Plan B and what would remain open?