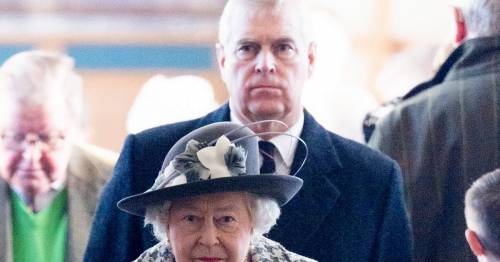 The Royal Family have remained silent after Prince Andrew failed in his bid to dismiss a sex case brought against him.

Prince Andrew is being sued by a victim of paedophile billionaire Jeffrey Epstein, who alleges he had sex with her three times after being trafficked at 17.

Virginia Giuffre claims she was introduced to the royal by the now-deceased Epstein and Ghislaine Maxwell, who was convicted of sex offences herself in December.

After a judge ruled the case could proceed despite Andrew's objections, the Royal family issued only a brief statement through Buckingham Palace saying: "We would not comment on what is an ongoing legal matter.’’

In a statement today, Virginia Giuffre’s lawyer David Boies said: "Virginia Giuffre is pleased that Prince Andrew's efforts to avoid a trial have been rejected and that evidence will now be taken on her claims against him. She looks forward to a judicial determination of the merits of those claims."

Prince Andrew is being sued by a victim of paedophile billionaire Jeffrey Epstein, who alleges he had sex with het three times after being trafficked at 17
(

Ms Giuffre began a legal battle against Prince Andrew in the US on August 10, 2021, accusing him of sexually abusing her at Jeffrey Epstein’s mansion when she was 17, a minor under US law.

The royal has vehemently denied the allegations.

In court documents, Ms Giuffre alleged the duke sexually assaulted her on three occasions causing her "significant emotional and psychological distress and harm".

In a 2019 BBC interview, Ms Giuffre claimed that she was introduced to Prince Andrew by Epstein and Maxwell.

The 38-year-old recounted that was told by Maxwell that she had to "do for Andrew what I do for Jeffrey".

Virginia Giuffre aka Virginia Roberts, who says she was forced to have sex with Prince Andrew at the age of 17
(

According to Ms Giuffre's allegations, she had sex with the duke for the first time at Maxwell's house in Belgravia in 2001.

Prince Andrew, the Duchess of York and Princesses Beatrice and Eugeine on a skiing holiday in Verbier
(

She alleged that the second time was at Epstein's mansion in New York, and the third at Epstein's private island, Little St James, in the US Virgin Islands.

Ms Giuffre also claimed in the court documents that she was forced into sex by explicit or implicit threats by Epstein, Maxwell, and/or Prince Andrew, stating that the duke knew her age and that she was a sex-trafficking victim.

She is filing the case under New York's Child Victims Act, which allows survivors of childhood sexual abuse to pursue a case which otherwise would have been barred because too much time had passed.

Previous : All Manitobans ‘highly likely’ to be exposed to COVID-19 in coming weeks, health official says
Next : Prince Andrew warned he will be quizzed ‘on private parts’ as nothing is ‘off limits’