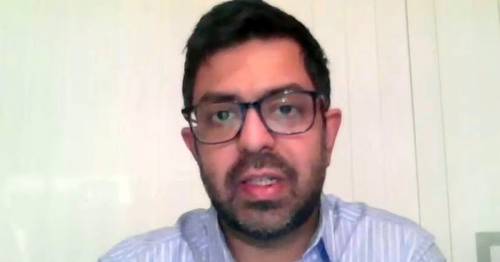 Brother of hero surgeon, 45, who was killed by Covid urges Britons to get booster

The heartbroken brother of a hero surgeon who died from Covid shortly before he was due his booster jab has urged Britons to get their booster jabs.

Dr Irfan Halim, 45, was double jabbed and passed away at the Royal Brompton Hospital in West London on November 14, following a nine-week battle with the virus.

He died only two months after his father Kamal, 75, also a doctor, died from Covid on September 24.

Now, Irfan’s younger sibling, Dr Amir Halim, who is also a medic, paid tribute to his brother who had spent a year of the pandemic on the frontline, trading surgery for treating Covid patients.

He also urged Brits to get the booster jab, saying that cases were “going up everyday” and “eventually it will affect someone you love in a very bad way.”

Dr Irfan Halim, 45, spent four months away from his family at the height of the pandemic working in Covid wards
(

Pleading with the nation to take the necessary steps to help tackle the pandemic, he said: “We have struggled, saying it's been the worst two months of my life is an understatement.

“Cases are going up every day. This virus doesn’t care if you are gifted, rich or poor.

“It will continue to affect lives unless we take necessary actions which include getting vax and boosters and limiting unnecessary contacts.

“Eventually it will affect someone you love in a very bad way.”

Then, talking about his big brother, he added: “He will always be big brother to me, he was a loyal and loving son.

“A father, son and uncle. The sheer volume of things he achieved, looking after his wife and four kids, multiple degrees.

“He touched a lot of lives, knew he was gifted and had the abilities to help a lot of people in many ways and never asked for anything in return.

“I will make sure his two sons and two daughters grow up knowing what an amazing person their father was.”

Colleagues had described Irfan as like “ten men in one body” who had treated 250,000 patients throughout his career.

Irfan collapsed during a shift on September 10, and after inititally being treated at Swindon hospital, he was transferred to the Royal Brompton in London, on September 26, where he died last week.

Dr Irfan Halim when working on a Covid ward
(

Dr Irfan Halim and his four children, all under 12
(

He said: “This virus is just a horrible thing. Dad caught Covid about a week before Irfan did. Irfan was still well when dad was admitted but collapsed at work around a week later.

“Dad never knew Irfan had become ill – but even in hospital when Irfan was on the ICU, his primary focus was on dad.”

Irfan received his second vaccine in January, but was struck down with Covid only six days before Britain’s booster programme got the green-light.

As a frontline NHS worker who was vaccinated nine months ago, he would have been at the front of the queue for the third shot.

Amir told the BBC : “He was always very happy, very energetic, until the day he passed a week ago he was exactly the same Irfan, all his childhood friends, family and loved ones remembered.

“We hoped he would recover, given his age. He was fit and well young man in his mid-40s. That's partly why we are so shocked and devastated more so than Irfan's loss than even dad's.

“Irfan spent a week in intensive care and deteriorated to the point where he was put on a ventilator.

“Until the day we were informed of the impending news, we had always hoped he would pull through. He just suddenly deteriorated a week ago and as a doctor myself I knew nothing else could be done at that stage.”

Irfan was isolated from his family for four months at the height of the pandemic last spring while treating Covid patients on the front lines.

Previous : British Columbians brace for more extreme weather, possible flooding on north coast
Next : Five Christmas benefits changes to be aware of – how you could be affected