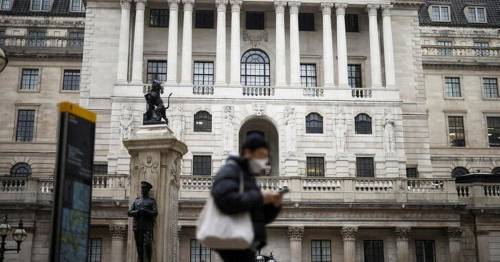 Interest rates have hit their highest level for more than a decade and inflation could top 11 per cent, as experts warn that the UK may already be in a recession.

On Tuesday (June 15), the bank of England also raised interest rates once again – this time by a quarter of a percentage point.

It was the Bank's fifth consecutive rise since December and means rates are now at their highest in 13 years, at 1.25 per cent.

But some experts fear rates could rise to as high as 3 per cent as the government struggles to get the economy back on track amid an ongoing cost of living crisis.

And inflation could be set to hit a staggering 11 per cent in the autumn.

Despite the Bank of England predicting that the UK economy could shrink by 0.3% in the second quarter, Chancellor Rishi Sunak said the British public should “feel confident” that he can rectify the situation.

“We have the tools we need and the determination to get inflation back on track," he told ITV News.

"I will make sure that I’m borrowing responsibly so that we don’t make the situation worse and increase mortgage rates more than they are.”

Sunak added that the government will get inflation down and that "strong growth will return" to the economy.

However, an economic adviser to former Chancellor George Osborne issued a grim warning – that the UK may already be in recession.

“It’s very, very likely now that the second quarter is going to see negative growth," he told the BBC.

“We may get some mechanical bounce-back in the third quarter, partly for complicated reasons due to the Jubilee holiday. But effectively growth is around zero and may get worse as we head into the autumn, particularly with energy prices going up.”

Cabinet minister Michael Gove admitted a "challenging and difficult time" was ahead for the UK economy.

Speaking at The Times CEO Summit, he said: "It is inevitably the case when you’re squeezing inflation out of the system that you will rely on a fiscal and monetary policy that will mean you cannot do all things you would in ideal circumstances like to support people through a difficult period."

Previous : Bride’s voice returns for her to say ‘I do’ in hospital wedding after brain surgery
Next : Young British gymnasts suffered emotional and physical abuse, damning report finds