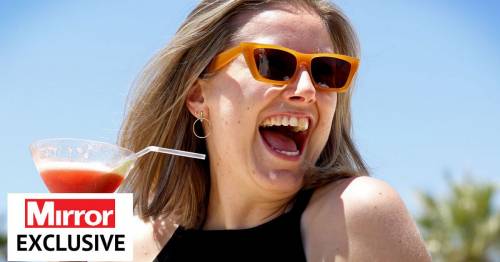 This lucky lot were enjoying a long-awaited sunshine break on the Algarve on Tuesday – where most hotels are already booked up for the half-term holidays.

Locals say it is “the calm before the storm”, with thousands of British families set to travel to Portugal after the overseas holiday ban was lifted and the country was included on the travel “green list”.

Tourism chiefs have been astonished by the “phenomenal” interest from Brits desperate to escape a soggy spring after a long lockdown.

Some hotel chains said they have no availability for the first week of June when most schools are shut. 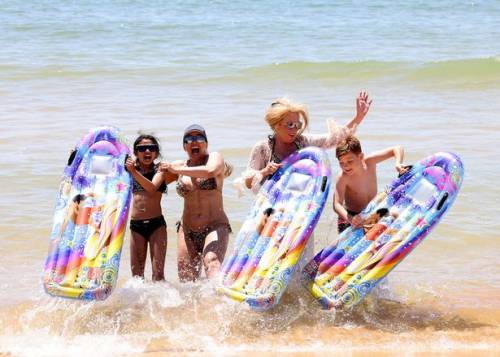 Joao Fernandes, head of the Algarve tourist board, told the Mirror: “Many of the hotels are completely full, although not all.

“So all I can say is people need to get booking as soon as possible. It’s been phenomenal.

“The feedback I am getting from hotels is that it will be very busy with families from the UK.

“We expect more bookings once people see images of tourists on the beaches and in the restaurants.” 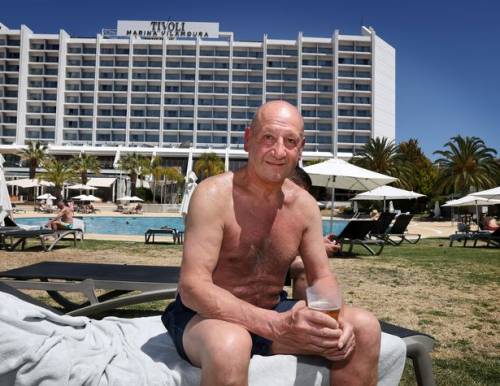 British tourist Harry Khan catching the sun rays while having a pint of beer, at the Tivoli Marina Vilamoura Hotel in Vilamoura
(Image: Julian Hamilton/Daily Mirror)

Mr Fernandes said thousands of Brits travelled to the Algarve on Monday as foreign travel restrictions were lifted.

“People were arriving with a smile on their face and swapping their winter clothes for shorts and bikinis.

“They were welcomed by typical Algarve weather, in the 30s and the sun shining.

“It was a refreshing day for everyone, including the locals who now feel there is a sense of returning to normal.” 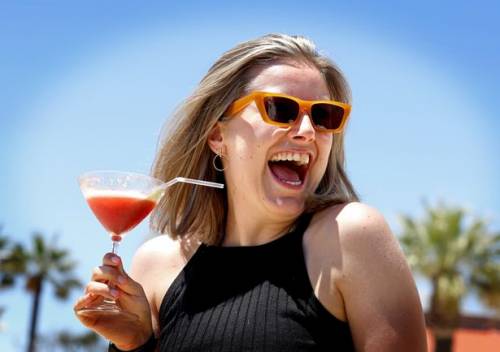 Frankie Thompson sipping cocktails by the side of the pool
(Image: Julian Hamilton/Daily Mirror)

“Since the English authorities announced the release of reservations, business in Portugal has been booming,” he said.

“Bookings for hotels increased by 250% on Friday and outside of tour operators, the bookings were up 450%.

“So many British companies are providing more flights to the Algarve.

“So everything is really booming with the British people coming back again.” 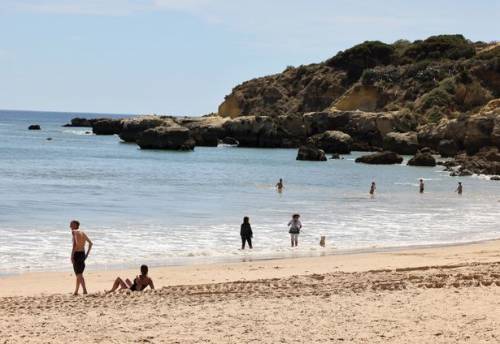 Geoff Bacon, owner of Almancil-based Golf and Leisure Villas, said demand had sky-rocketed in the past few days.

The 55-year-old, originally from Chingford, Essex, told the Mirror: “The golf bookings have gone bosh, through the roof.

“The villas are also pretty scarce now, especially for half-term and more so for the summer.

“As you can imagine lots of villa owners are coming out after being stuck in the UK for so long.

“But we are getting calls and emails from families eager to see some sunshine during half-term. 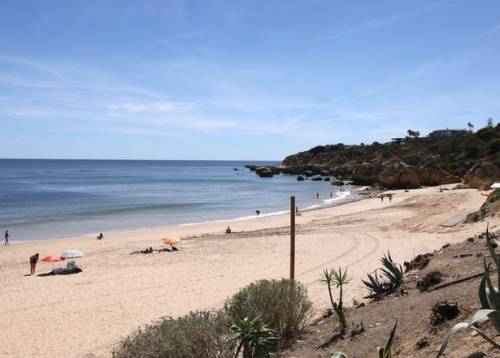 “The golf side of the business has been dead for the past 18 months but now it’s bonkers again.

“It’s a great relief for us to be busy again and it’s nice to know so many Brits are coming back.”

Brits continued to flock to the Algarve’s beaches and pools on Tuesday as they enjoyed their well-earned holidays.

Jan Johnson, 54, from Swansea, flew with her extended family after spending lockdown caring for her elderly mum.

She is also celebrating getting the all-clear from doctors after a gruelling battle with breast cancer. 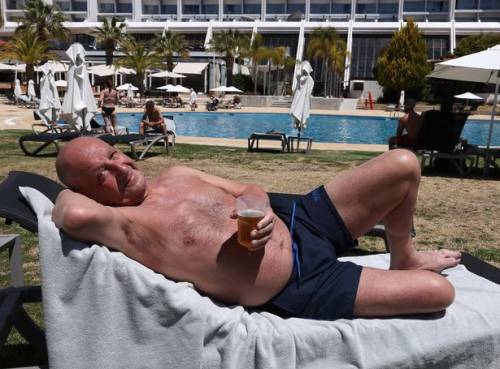 “My mum had a stroke so I’m her full-time carer. I was doing 68-hour weeks just looking after her during lockdown,” she said.

“I was also going through the whole cancer thing at the same time, so I’m not going to lie, it’s been tough.

“I just needed a break so I paid for my mum to have full-time care for a week and booked the holiday.

“I’ve had both jabs so I wasn’t nervous coming out here. It’s been fabulous and a much-needed recharge of the batteries.”

Jan enjoyed the sunshine and 80C temperatures in Vilamoura with her nephew Garan (corr), ten.

They were joined on the sand by Jamelah May, 43, who came on holiday after a “year from hell” that saw her beauty business collapse.

Sitting on Vilamoura beach with daughter Mylee, 10, she said: “It feels like I’m putting all the worries of lockdown behind me.

“I had a tanning salon in Feltham which went bust because of the lockdown.

“We were accumulating debt because we couldn’t open and it turned into a vicious cycle.”

Jamelah, from Esher, Surrey, added: “It’s been an awful year so when I saw the chance to come to Portugal I jumped at it. 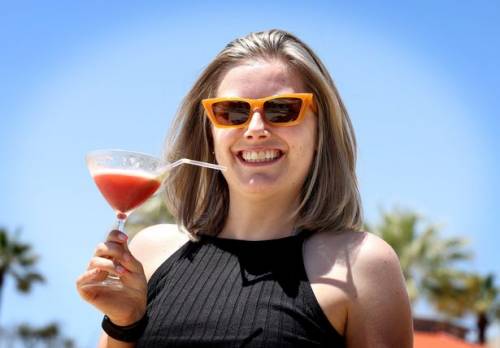 “I’m training in aesthetics and the course starts in June, so this is the only chance to get away.

“I think everyone in the UK is thinking the same thing – they just want to go on holiday.”

Chris Watton brought his recruitment team out to Vilamoura as “thank you” for working flat out during the pandemic.

His UK firm has been involved in a global search for highly trained specialists to develop the Pfizer-BioNTech vaccine.

And he treated his team, Jake Mann, 26, Frankie Thompson 29, and her partner Adam Hopkins, 35, to a much-needed break. 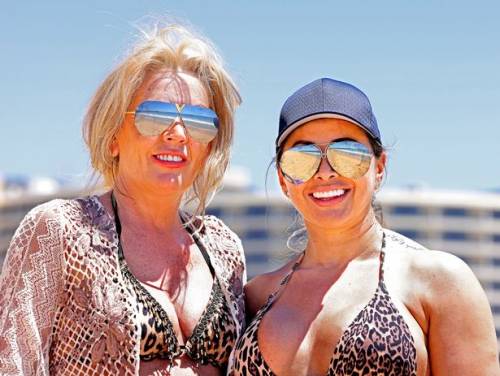 “We have all been working non-stop for the last year and this is a reward for us” said Chris, 38.

“We all feel the work we have done has definitely made a difference.”

The Sussex-based group made the “hassle-free” trip from Heathrow on Tuesday.

“We are all sitting here outside, having a beer in the sunshine. So would I recommend people to come? 100% yes,” he said.

Harry Khan, 60, from Sale, Greater Manchester, flew out to Faro with seven pals for a five day golf break in Vilamoura on Monday. 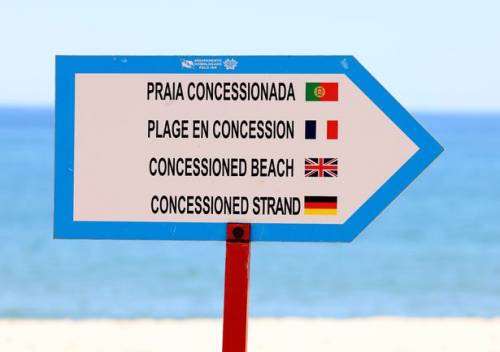 It is his first trip abroad since he was struck down by Covid during the first wave of the pandemic in March last year.

Harry was treated for a week in Wythenshawe Hospital and at one point it was feared he would have to go into intensive care.

But the super-fit father of four, who has played football all his life, was able to battle back from the brink.

“If I had not been so fit and healthy I don’t know what would have happened” he said.

Harry is well on the road to recovery but he said: “It knocked me for six.

“It has taken me a long time to get over it. It was my lungs that were the problem.” 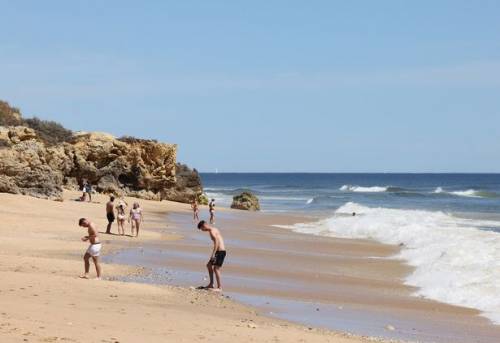 Albuferia beach will be busier than this in no time
(Image: Julian Hamilton/Daily Mirror)

So when he had the opportunity to travel to Portugal, he jumped at it.

“You only live once” he smiled.

“When the chance came I went for it. We took a bit of a chance in booking before it was officially open but I’m so glad we did.”

Lying on his sun-bed next to the hotel pool, clutching an ice cold beer, he said: “Look at the difference.

“Two and a half hours after leaving Manchester we were here enjoying the sun. It’s a different world.

“I’ve told my wife I’m on a sales course in Skegness!”

Harry said other Brits playing a break need to be aware of the number of tests which tourists have to take before, during and after their holiday.

A PCR test is required before leaving the UK, another test needs to be done in Portugal and a third within two days of returning to the UK.

“It is expensive, particularly if you are talking about a family,” said Harry. “People do need to be aware of what is expected.”

Previous : Suspected dog thief lay in wait for hours before breaking into home to snatch puppies
Next : Tributes pour in for ‘ray of sunshine’ teenager who died after falling off bridge