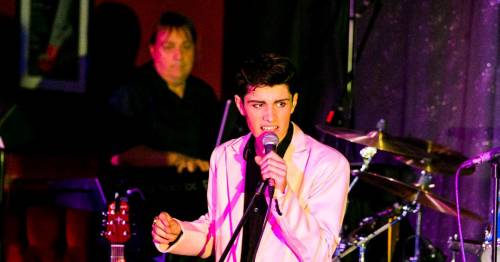 A British teenager has been crowned Europe’s best Elvis impersonator years after he did his first impression in a jumpsuit made by his nan.

Talented Emilio Santoro, 19, was introduced to ‘The King’ by his grandparents when he was a toddler.

He then learned to copy his mannerisms aged just four by studying videos of Elvis.

Emilio performed across the UK as a schoolboy and has now been crowned European Elvis Tribute Artist Champion.

“To be crowned champion is just amazing,” said the teen, from Weston-super-Mare, Somerset.

“Everyone always says life is too short, follow your dreams, and it couldn’t be any more true really,” he said.

Emilio wearing the Elvis Presley outfit he got for Christmas 2006
(

“I had a jumpsuit that my nan and auntie put together for me and ever since then I’ve wanted to pursue this as a career.

“I had a dream since I was a young age that I wanted to be on the stage.

Emilio, aged seven, in a golden suit imitating his idol
(

“At first I was nervous to pursue that dream but luckily I have a family behind me and since then I’ve never looked back.”

The teenager’s next show is in his hometown, ahead of performances in Germany, America and Canada, as well a UK tour in November.

Previous : One in 10 Brits ‘in pain’ on NHS waiting list due social care collapse and lack of cash
Next : Millions more workers to get a pension boost under bill being proposed today