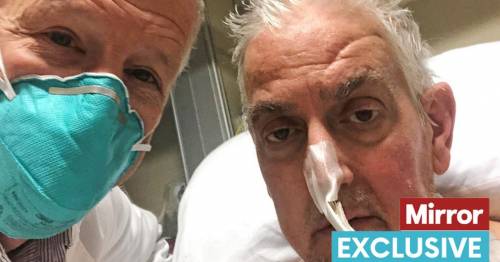 A British scientist planning to transplant a pig heart into a living human says it marks “the beginning of a new world for medicine”.

The professor of surgery at University College London is looking be the second person in the world to carry out such an operation.

He spoke to the Mirror just weeks after the first pig heart was transplanted into a human in the US.

David Bennett, 57, is now having his heart rate and breathing monitored daily to see how long the organ works.

He is now setting up a centre breeding pigs genetically modified so that human bodies do not reject their organs and says he will conduct the procedure in the next three years.

Prof McGregor said: “We’re on the threshold of a completely new role for medical science and it will never quite be the same after this operation.

“We’ve started on a road that is replacement of organs from animals, to treat patients who are suffering and dying from human disease. This is a big deal.

“Our plan is to proceed to the use of pig organs for patients with end stage kidney and heart disease.

“This experiment really is a huge glass breaker opening up a better future for hundreds of thousands of people within about 10 years.

“This is all about creating opportunities for better treatments for those who can receive treatment, who are suffering and dying.”

Less cautious medical regulations in the US mean Prof McGregor is setting up his pig-to-human heart transplant operation in Minnesota.

He has developed two “knock-out” genes that allow pig organs to be safely used in humans.

He believes Europe will see its first pig-to-human transplant in Germany within three years, and in Britain in between five and 10 years.

Doctors replaced David's heart with one from a one-year-old, 17-stone pig gene-edited and bred specifically for this purpose
(

It will involve the setting up of specialist facilities where pigs can be bred genetically modified to tweak, silence and add key genes that effect key organs such as the heart and kidney.

In a decade Prof McGregor says they should be available on the NHS.

The heart used in the operation on Mr Bennett had four pig genes deactivated and six human genes added, in the hope that his immune system will better accept it.

He was selected at the University of Maryland Medical Centre because he had terminal heart disease was too ill to qualify for a human heart.

Prof McGregor will recruit a similar patient and offer them the chance to live longer and move forward our understanding of medical science.

He said: “We are all waiting day by day and hoping that Mr Bennett gets through this and does well.

“There are six million people in the US who have heart failure, of whom 250,000 die of heart failure each year. There are many potential patients.

“We’re going to see individual experiments like this and the important thing is that this heart could work for a very long time, which is what we all hope for.

“This offers a better future for mankind.”

Heart transplant patients in Britain can expect to wait on average around two years.

Image:
UNIVERSITY OF MARYLAND SCHOOL OF)

There are currently 314 patients waiting for a heart transplant in the UK including 42 children.

The real number who could benefit from a new heart is around ten times that, Prof McGregor said.

Many people whose heart is failing never make it on to the waiting list because they are too ill or do not qualify due to limited suitable organs.

Hearts removed from a brain stem-dead donor and transplanted within a few hours, and match the recipient biologically and in size.

The Daily Mirror has campaigned for six years to increase organ donation and successfully lobbied the Government to introduce a “deemed consent” system in England in 2019.

Prof McGregor, who was on the surgery team which conducted Britain’s first heart transplant in 1979, paid tribute to the Mirror for years of campaigning on organ donation.

He said: “Since human transplantation began there has never been an adequate number of human donor organs, and there simply never will be.

“The reason that many of us have spent substantial time trying to develop xenotransplantation is simply because of that unmet need.

“So many people have worked so hard to optimise organ donation, your own newspaper for example, and that’s been tremendously beneficial.

“But the number of transplants that are needed, certainly for the heart, it’s huge.”

More than half a billion pounds has already been spent on medical research into xenotransplantation – to get scientists to the point where a complete animal organ has been transplanted into a living human.

A spokeswoman for NHS Blood and Transplant said: “We are always interested in new research that may allow more patients to benefit from transplant in the future.

“While transplant operations carried out today are very successful there are still not enough donor organs to help all those in need.

“Recently, through the culmination of years of research, we have seen some important steps forward, and this latest development makes the possibility of transplantation between animals and humans a potentially safe and ‘attainable’ future treatment option.

“However there is still some way to go before transplants of this kind become an everyday reality.

“We congratulate the team who have successfully carried out this operation and our thoughts are with the patient and their family in the days to come.

“While researchers and clinicians continue to do our best to improve the chances for transplant patients, we still need everyone to make their organ donation decision and let their family know what they want to happen if organ donation becomes a possibility.”

Previous : RCMP’s contract policing is headed for a federal review
Next : Spy scandal may be ‘tip of iceberg’ with more Chinese agents ’embedded in UK society’