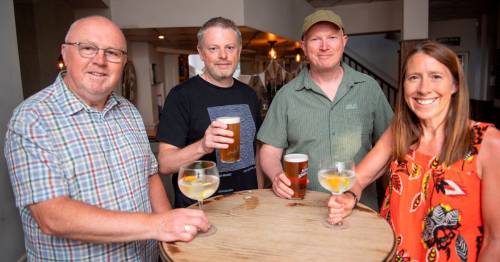 Even before the pandemic hit, Britain’s pubs were facing a difficult future.

But since 2019 there are now 8,000 fewer pubs and bars. And nearly a fifth say they may not survive beyond August if restrictions do not lift in England on June 21.

Pubs are far more than just places to have a drink or two. They are refuges for the lonely, centres for fundraising, homes to sports and arts groups, supporters of live music and venues for parties, weddings and celebrations.

The Mirror cannot save every local but we are trying to save one at least.

We are urging readers to support the community-spirited residents seeking to buy the Trawden Arms in Lancashire.

For them the pub is a vital asset, just as they are in so many parts of the country.

If we all pull together, the Trawden Arms can continue to pull its pints.

You would have thought that when Covid struck, the Government would strain every sinew to tackle the pandemic.

We now know there was a real danger some Tories were biased in selecting their friends and associates for contracts, who then profited from the worst public health crisis in a century.

A court on Wednesday ruled the Government acted unlawfully by handing a lucrative Covid contract to a firm run by friends of former Downing Street adviser Dominic Cummings, as there was an apparent bias in its decision.

Claiming that normal procedures did not apply because the country was in a national emergency simply does not wash.

The truth is the Conservatives have been found to be cavalier with taxpayers’ money.

Boris Johnson may not care about the Northern Ireland peace process but thankfully US leader Joe Biden does.

The President has warned the UK/EU stand-off threatens the Good Friday Agreement.

The Prime Minister should heed his advice and stop the dangerous grandstanding.

Previous : Amputee dad beaten by knife-wielding thugs as he saved his dog from abduction
Next : When the stamp duty holiday ends – and who gains from the September extension