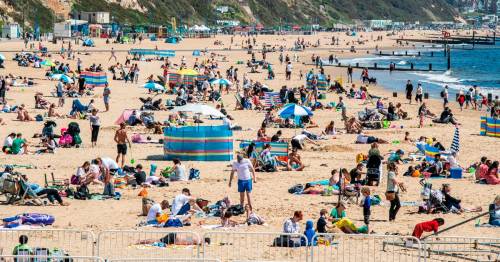 Britain will be more roasting than Rhodes as a mini heatwave puts temperatures on the Greek island in the shade.

It follows glorious weather today which saw sunseekers flock to beaches all across the country.

A band of high pressure is forecast to bring fine and sunny weather across most of the UK today. Parts of southern England will reach a high of 24C making it the hottest day the year – while Rhodes is expected to be only 23C.

Above average temperatures should continue in the South East on Monday thanks to hot air sweeping in from North Africa.

But experts say rain will hit most regions later in the week, with Wednesday and Friday washouts.

Conditions were perfect for this carnival in Coventry
(

Many people soaked up the fine weather in Bournemouth yesterday as temperatures hit 22C in the South.

In Coventry the streets were a blaze of colour as 1,200 performers took part in its This Is The City carnival.

The North was slightly cooler but sunseekers still hit the beaches at Blackpool and Tynemouth.

Warm spells across the North today may be mixed with scattered showers.

Met Office chief meteorologist Andy Page said: “The plume of warm air we’ve been expecting from the south will bring higher temperatures across the whole country over the next week.”

Many people will enjoy warm sunny spells but heavy showers are set to move across the whole of the country, particularly in the North and West.

Forecaster Aidan McGivern said: “If we get some sunshine and this plume, temperatures could be rising. But it brings the threat of thundery outbreaks.

“In some places, it would just be rain but for central and southern England, and the south coast there is the risk of heavy downpours, thunderstorms and lightning.”

Hayfever sufferers have been warned to expect high levels of pollen across all of England today.