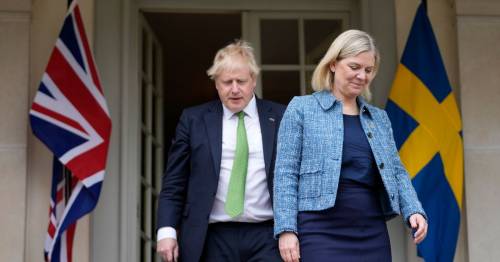 Britain would come to Sweden’s defence if it was attacked by Russia for applying to join NATO, Boris Johnson confirmed today.

Stockholm is expected to lodge an application within days for membership of the 30-nation alliance, following Moscow’s invasion of Ukraine on February 24.

Coalition leaders are due to discuss any bid at their summit in Madrid next month.

But the potential move raised fears of retaliation by Moscow before Sweden formally joins and enjoys the protection of NATO’s Article V collective defence clause, which states that an attack on one member is an attack on all.

The Kremlin has threatened to respond if Sweden applies to join the alliance.

Speaking after talks with Mr Johnson at her country retreat at Harpsund, Swedish Prime Minister Magdalena Andersson said: “The tensions in this part of Europe and around the Baltic Sea have increased during the last years given Russia’s aggression towards Ukraine, also before February 24, also the military build-up of Russia and also a more aggressive rhetoric from Russia.

“Of course, after February 24 tensions are even stronger or more difficult than before.”
She added: “If Sweden decides to send an application to join NATO, Russia has said they will respond, but exactly how they will respond is unclear.

“They have said they will increase their military presence in this region if Sweden and/or Finland sends in an application.”

The two PMs signed a mutual security assistance deal which would allow the countries to "share more intelligence, both to our military exercises and further our joint development of technology", said Mr Johnson.

He added: “What we're saying and doing now is, in some ways, no more than a statement of the obvious – that two liberal democracies faced with an attack upon one or the other would want to come to each other's support, whether it's in the event of a disaster or military attack.

"What we're saying today is that upon request from the other party, we would come to the other party's assistance, and it's vital to state that, even more important to state that now, in the grim circumstances in which we find ourselves with the Russian attack on Ukraine.”

Asked if the UK would “assist Sweden with nuclear weapons in case of war”, the PM said: “When it comes to our nuclear deterrent, that’s something we don’t generally comment upon.

“But what I have made clear is that it is up to either party to make a request and we take it very seriously.”

Ms Andersson said: “In times of crisis, cooperation becomes even more important.”
She added: "If either country should suffer a disaster or an attack, the United Kingdom and Sweden will assist each other in a variety of ways.

“The support will be given on request by the affected country and may include military resources."