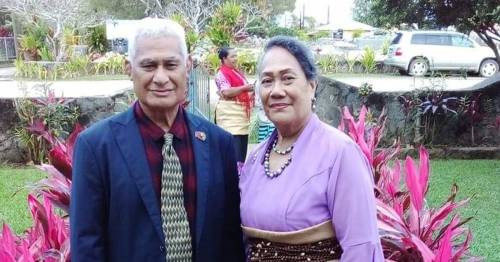 A woman whose parents live in Tonga is "desperate" to speak to them as international communication with the island remains cut following a tsunami.

Almost one week on, many families are still unable to contact loved ones after an undersea volcano erupted near the Pacific country on January 15.

Siniva Filise, 42, who lives in Barry, Wales, has been trying to contact her father Fakahau Valu, 73, and her mother Lioneti Valu, 66, since Saturday.

Ms Filise was told her parents are "safe and well" on Sunday, after messaging a former colleague on the island who works for the armed forces and has access to satellite connectivity.

But almost one week on she has been unable to speak to them directly.

The mother-of-three said it has been "one of the toughest moments" of her life.

Have you been affected by the tsunami? Let us know at webnews@mirror.co.uk

"I messaged my friend and she managed to speak to my mother, who said that they are well and they send their love," she said.

Ms Filise said her brother, who lives in New Zealand, has put together a parcel of "basic necessities" such as food and water, that will leave on Monday on a shipping container arranged by the Tongan NZ Relief committee.

The eruption was reportedly as powerful as 500 nuclear bombs and heard 10,000km away in Alaska
(

"But he had no way to contact my parents to make them aware that it's coming to them," Ms Filise said.

She was speaking after it was announced that UK-funded aid is heading to Tonga to help the relief effort with supplies, including almost 100 tents, onboard HMAS Adelaide, of the Australian navy.

The Royal Navy's offshore patrol vessel HMS Spey is also due to sail from Tahiti to Tonga with water and medical supplies.

A view from a P-3K2 Orion aircraft of an area covered in volcanic ash in Tonga, after the eruption of the Hunga-Tonga
(

UN humanitarian officials estimate that about 84,000 people, more than 80% of Tonga's population, have been affected by the eruption of the undersea volcano, which has led to deaths, injuries, the loss of homes and polluted water.

British charity worker Angela Glover, 50, from Brighton, East Sussex, died after being washed away trying to save the dogs she cared for at her animal rescue shelter on the island.

Meanwhile, Tongan Olympian and flag-bearer at the games, Pita Taufatofua, said on Friday that his 74-year-old father had returned after disappearing during the tsunami.

He thanked well-wishers and described how his father, Dr Pita Faiva Taufatofua, who is the governor of the islands of Haapai, walked into the family home almost a week later to "everyone's shock".

"Turns out straight after the Tsunami he boarded the Navy boat heading out to Haapai to help," Mr Taufatofua tweeted.

"He was working in rescue and first response with the navy at the ripe young age of 74 and saw first hand all the destruction… Very proud of this man!"

Mr Taufatofua, who became widely recognised after being his country's flagbearer at the 2016 summer Olympics and 2018 Winter Olympics, is training in Australia and has fundraised more than £300,000 towards the disaster effort.

His GoFundMe page can be accessed here.

Previous : Queen ordered ‘petulant’ Andrew to back down over royal loo dispute with Charles
Next : At least 70 people, including three children killed in Yemen airstrikes – World News