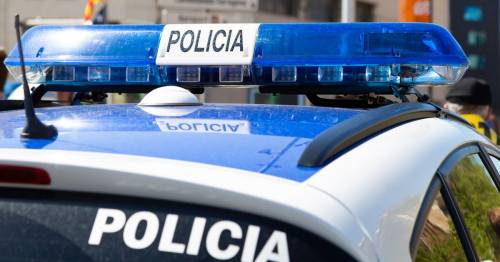 A British tourist has died in Magaluf after reportedly falling from the seventh floor of a hotel.

The incident happened around 8.30am on Thursday at a hotel in Notari Alemany, Calvià, named locally as four-star Melia South Beach Hotel.

Police are investigating the circumstances.

Reports in local press are suggesting the man might have been trying to balance on the rails of the hotel and slipped.

He fell more than 15 metres.

Relatives and friends are said to be being interviewed following the tragedy.

A Spanish Civil Guard spokesman said: “The dead man is a 34-year-old British man. The incident is very recent and there’s not a lot we can say at the moment as the investigation is ongoing.”

Civil Guard sources say they believe he could have been intoxicated due to his “strange” behaviour before the incident.

The incident happened at a hotel in Notari Alemany street
(

A well-placed source close to the case added: “He plunged from the seventh floor of a hotel called South Beach in Magaluf.

“We think he may have been drunk at the time because of the way he was acting before the incident but it is really is too early to say for sure what has happened here.

“At the moment it is being treated as an accident rather than a crime although the dead man is thought to have been with other people when this drama occurred.”

The emergency services rushed to the scene, including an ambulance, police and the Civil Guard.

Doctors from a nearby medical centre also attended but were unable to revive the victim.

An autopsy is to be carried out in the next few hours.

A spokesman for a regional government-run emergency response coordination centre confirmed: “We got the first call at 8.39am this morning.

“Ambulances, local police and Civil Guard were sent to the scene but there was nothing that could be done to save the man who was subsequently declared dead.”

A receptionist at the hotel where the incident occurred said: “It’s all very recent and we’re not making any comment at the moment.”

The hotel where the incident took place overlooks Magaluf beach.

It has four pools and a spa with a sauna and Turkish bath as well as an elegant beach club.

It used to be called ME Mallorca.

TripAdvisor describes it as an “ideal place for stylish vacations.”

It adds: “The music, the sun and the fashion are the main protagonists of the hotel, which will immerse you into vibrant and chic summer ambiance, with relaxing days and nights to remember.”

Fines remain in place for banned practices like balconing, the Spanish term used where people try to jump from their balconies into swimming pools or put their lives at risk by climbing from one outside balcony to another.

Meanwhile, a tough six-drinks only alcohol rule is also attempting to curb any unruly drunken behaviour and keep tourists safe.