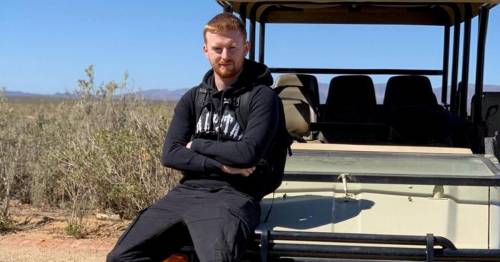 A British man who was jailed for 25 years after police found harmless CBD oil in his car has been "tortured" in a Dubai jail, a friend has claimed.

Billy Hood, 24, said he did not know the bottles of CBD oil and a vape pen were left in his company vehicle after giving a friend from London a lift to the airport two weeks before his arrest.

He was with another friend at his apartment on January 31 when Dubai police pointed a Taser in his face as he went to his car to retrieve a phone charger.

Speaking to his friend Alfie Cain, a football agent, after his arrest, Billy said he was beaten daily for five days by officers in jail.

Alfie told The Sun : "It's been bad in Al-Barsha, I'm not going to sugar coat it.

"When they took him to the CID drugs unit they beat him for an entire five days, he told me police officers tasered him, slapped him in the face and all they fed him was bread and little bit of water.

"He was basically tortured and put in a cell with 30 other people for five days."

The man, who works as a football coach in the United Arab Emirates, said he was forced to confess to a false statement written in Arabic by heavy-handed detectives.

His friend said Billy was told that he could then go home if he signed the paper even though he did not understand what it said.

Using CBD oil in a vape is legal in Britain and is often used to relieve pain, anxiety and stress.

CBD oil is legal in the UK
(

However, because it contains traces of THC – the main psychoactive ingredient in cannabis – Mr Hood was detained under the UAE’s strict drug laws.

Billy's mum Breda Hood has accused the Foreign Office of failing to support the family.

She made an emotional plea, saying: “As a mother, and I know a lot of people who know Billy, please, please, if anyone can help get Billy home, please do. That’s all I can ask from you.”

Reacting to the jail term, Breda said: “It broke us completely. It still breaks me every day just thinking about it, just seeing his photo there.”

Billy, from west London, was allegedly kept in an isolation cell for 14 days after his arrest.

Breda said: “We didn’t even know Billy was arrested. It was the fact he didn’t turn up for work for three days and his boss went to the police station reporting Billy missing…”

In a statement released through the campaign group Detained in Dubai, Mr Hood said that he was “wholeheartedly against” drug use.

His brother created a GoFundMe page to raise money to pay for their legal fees – and the fundraiser has raised almost £15,000 so far.

A spokesman from the Foreign Commonwealth Office said: “We are giving consular support to a British man who has been imprisoned in the UAE.”