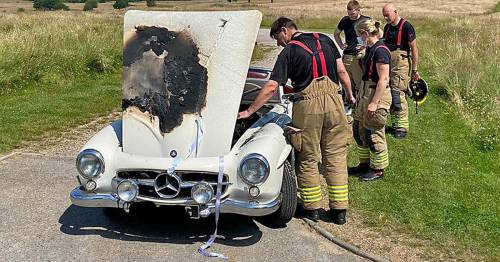 A bride was late getting to her wedding after the classic car she hired caught fire as temperatures soared.

She wanted to make her special day go with a bang on Tuesday so booked the posh vintage motor to make sure she arrived in style.

But disaster struck on the way to the reception at the five-star Four Seasons Hotel in Hook, Hampshire.

The bonnet of the flash white Mercedes burst into flames with the wedding party miles away from the plush venue.

The vehicle overheated as the mercury crept towards 30C during the heatwave and they were left stranded by the roadside.

Fire services arrived and the unharmed bride was said to have been taken the rest of the way in a more modern BMW.

But things had to be put back a little as she had to make new plans after the classic car ran into trouble on the way.

"The crew were called out to a vehicle fire at the drive up to the hotel yesterday morning at 11 o'clock," said the fire chief after his team came to her rescue on Tuesday.

The classic car was a victim of this week's heatwave
(

"The bride was en route to her wedding, so she was picked up safe and well and taken the rest of the way in a BMW.

"It certainly added a bit of drama to her big day.

"It had the potential to be dangerous but thankfully everything was fine and the car was in a state to be repaired.

"The car had been on fire but when crews arrived it was already out."

The wedding, though delayed slightly, still went ahead at the Georgian manor house hotel, which is situated amongst 500 acres of parkland.