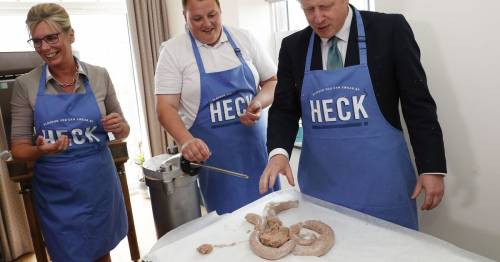 Four hours of negotiations in London closed in a bitter stalemate today despite a bid to resolve a string of splits over trade with Northern Ireland.

Sources traded angry barbs as the UK threatened to extend a grace period on meat trade across the Irish Sea without the EU's permission.

That could break international law – and the EU today threatened to slap tariffs on British goods in return.

Since Brexit, UK farmers have been banned from sending "chilled meat preparations" like sausages and chicken nuggets to the EU.

The ban is a blanket EU rule that applies to chilled meat preparations being imported from any non-EU country.

But now the clock is ticking on trade from Britain to Northern Ireland too – despite Belfast being within the UK’s borders. 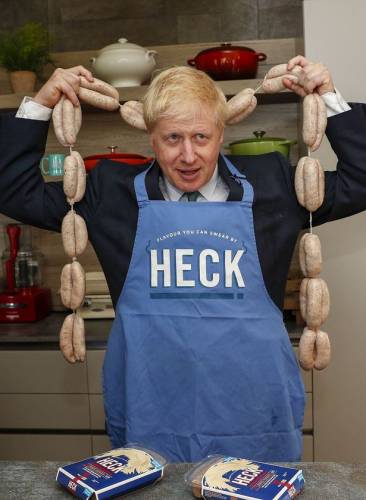 Boris Johnson had tried to downplay sausage fears – but they're meatier than he suggested
(Image: DARREN STAPLES/POOL/EPA-EFE/REX)

Sausages are allowed to be sent West across the Irish Sea but only for a six month grace period, which expires on June 30.

This is under the terms of Boris Johnson's own Brexit deal, which he signed in 2019 and claimed was "oven-ready". It rules Northern Ireland must follow EU rules in some respects to avoid a border with the Republic.

But ministers have since heaped blame on the EU – and the UK today warned it would consider “all options” to keep chilled meats flowing to Northern Ireland.

Sources said the UK is "obviously" looking at unilaterally extending the six-month grace period without the EU’s permission – a move EU officials have warned would lead to swift retaliation.

A senior UK source close to the negotiations complained the EU was being "excessively purist" – by choosing to uphold the law. 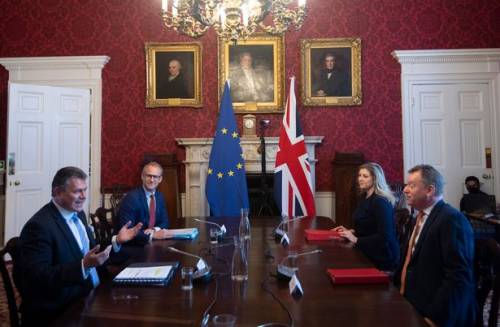 The source complained: "We hoped… they would behave pragmatically and help us implement it in a way that reflected all the sensitivities. We thought they'd learned that.

"Normal EU practice for countries is just to suggest the law has to be implemented and that's that, but we did hope for something a bit better in this context."

The source hinted a UK extension to the grace period could come at the last moment, saying: "There are 21 days to go. That’s the deadline. There’s still plenty of time to talk to try to agree something before that point."

The source added: "It seems like an unnecessary issue to have a major argument about but if we can’t extend it, all options remain on the table."

He warned patience with the UK was wearing "very, very thin" and the EU would assess "all options" – including suspending trade or services parts of the the six-month-old Brexit trade deal, or slapping tariffs on UK exports.

"I do not want this to happen," Mr Sefcovic told journalists in London.

Asked if the EU could slap tariffs on UK exports, the UK source said: “Obviously they have the right to do that – I just don’t think it helps the situation.”

And the UK source warned the longer the EU failed to meet its demands, the less money it would get for Britain taking part in EU programmes.

“Obviously we’re not paying until we associate. That’s not a withholding of contributions, it’s just that you don’t pay to be part of the programme," the source said. “So the longer they delay the less money they get”.

The UK today insisted it had made a suggestion on resolving the row which “recognises the high standards” of both the UK and EU on meat. 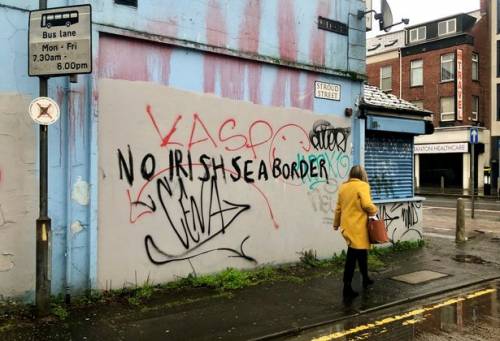 The row is tied to many more issues than meat and has sparked unrest in Northern Ireland
(Image: PA)

Mr Sefcovic also revealed he offered the UK a temporary deal on alignment for animal products that the UK could pull out of.

He told journalists: ”Let’s do it on a temporary basis. If you have a big trade agreement coming then that’s fine, we will look at it again".

But the UK said “substantive progress has not yet been made”.

The UK statement added: “There is an urgent need for further discussions in order to make real progress, particularly to avoid disruption to critical supplies such as medicines.

“The UK will continue to work actively to find solutions. If solutions cannot be found, the Government will of course continue to consider all options available for safeguarding peace, prosperity and stability in Northern Ireland.”

The negotiators had been trying to resolve a string of splits over Northern Ireland, where the Brexit arrangements have prompted unrest and led to the resignation of First Minister Arlene Foster.

Unionists and Loyalists are furious about the arrangements because they effectively create a border in the Irish Sea.

Some British goods are subject to EU rules when they move to Northern Ireland, in order to stop firms using the region as a "back door" into the EU.

The UK said there was progress on allowing guide dogs to enter Northern Ireland from Britain; EU access to UK customs databases; and uniting IT systems between the two sides.

The UK also said it expected EU proposals on the supply of medicines and livestock movements to Northern Ireland.

But progress was lacking on key other areas including parcels, tariff rate quotas and other commodities like seed potatoes, which like sausages will also be banned from moving from Britain to Belfast.