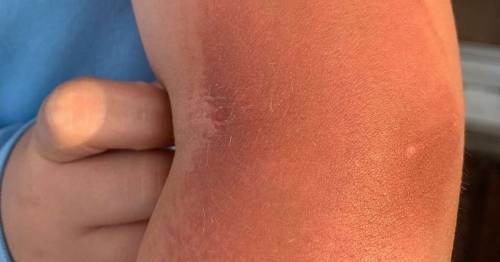 An eight-year-old boy was left with a nasty burn mark after he leant on a telegraph pole and scorched his arm.

Little Jacob was playing outside with his friend when he leant on the wooden telegraph network post which was covered in a brown, glossy substance in Bispham, Blackpool.

His nan Linda Robinson was furious when the youngster came home last weekend complaining of a brown mark on his skin and asked if he could have a shower to wash it off.

But hours later, it started to itch and Linda tended to the burn with soothing cream, reports Lancs Live.

The following day, Jacob said that the mark had become hot and sore to touch as it continued to get worse.

Linda, who is Jacob's guardian, decided to take him to a clinic where she was advised to keep it clean and contact Blackpool Council.

The pole was suspected to be covered in a glossy chemical
(

"The mark is still quite nasty and sore to touch. I'm angry and concerned for other people," she said.

"I also think of what could've happened. He could've put his arms around it completely, he could've rested his face on it.

"God forbid a child should burn their face like that or he could've touched his eyes after touching the post and the repercussions of something like that are really quite scary."

The post where Jacob was playing is a 6G internet post owned by the company 6G Internet Limited. IX Wireless is the company responsible for the post and others in the area.

Linda said: "There's a few of of these posts around here I walked round to look at them and from really low down from where a toddler would stand there's traces on there too.

The 6G Internet sign, which can be found on posts in residential areas like Bispham, is the name of the company and is not to be confused with the concept of 6G networks.

These posts are used to carry through Wi-fi connections from a network created and owned by the 6G Internet Limited company.

With many being located in public areas, Linda said she wished there had been some form of advice or warning made noticeable around the posts.

"I looked around and even on the other ones to see if maybe there was a sign that had been blown off, but when I've gone to the other places there's no sign to say be careful or do not touch.

"You get signs for anti vandal paint so just something like that would give people the heads up. It's quite bad really, it's not good."

Linda posted the incident on a local Facebook group to warn others in the area to be careful if their children are playing in streets near such poles.

Her grandson's ordeal gathered a lot of attention with many people suggesting that the brown substance was creosote – a chemical historically used on telegraph poles.

The industrial chemical is used to preserve wood and should not be used in residential or outdoor recreational areas where it could come into contact with people's bare skin, according to the Health and Safety Executive.

It was banned for general sale and use by the public in 2003.

Creosote is known for being an excellent wood preservative, typically giving a pole life of 40 years or more. It will no longer be allowed to be used as of July 2023 under new laws.

IX Wireless, the company responsible for the pole, said an investigation is under way with the company trying to contact Linda over the incident.

A spokesperson said that they cannot confirm whether it was a 6G telegraph pole that caused the burns at this stage.

They added that all equipment is "fully compliant" with local and national health and safety standards.

"Unfortunately we don't have anything to add having not been able to speak to the lady in question. 6G Internet reached out to her via Facebook having been made aware of the public post regarding her grandson," they added.

"We asked for her contact details in order to pass them onto IX Wireless who install the telegraph poles.

"The contact details were received and passed on to IX Wireless as agreed. Numerous attempts to contact via telephone and email were made, to no avail. Without speaking to the person we are unable to confirm if the incident occurred from contact with a 6G telegraph pole.

"6G telegraph poles look similar to other providers who use the same materials, without any further information we are unable to investigate fully at this time.

"We will continue to attempt to make contact with the lady in question; rest assured that once we do receive more details we will carry out a full and thorough investigation. All equipment installed by IXW is fully compliant with local and national health and safety standards."

Lancs Live contacted IX Wireless over the issue of creosote but received no response.

A spokesperson for Blackpool Council said: "The post is the property of IX Wireless so you would need to ask them for a response. We have received a complaint from a resident and we have reported it to the company that owns it to investigate."