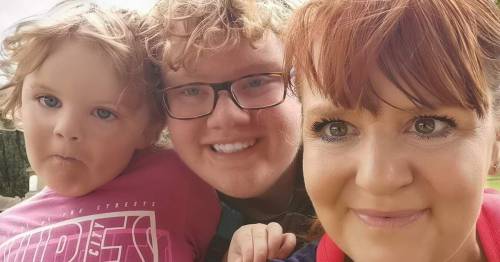 A mum living in a mouldy council flat with her two severely disabled children has told how her son was allegedly scalded by boiling water pouring from the bathroom ceiling.

Kathleen Reid said the council property in Dundee, Scotland, has “human waste” seeping down the walls and mould so bad it has caused the family to break out in rashes.

The 47-year-old, who is mum to autistic sons Paul, seven, and Jamie, 17, said she has also suffered personal health issues as a result of the poor housing and has had to use inhalers, steroids and antibiotics.

She claims the house has been “hell” since she moved there in 2017, having faced numerous problems with the home she says is plagued with damp.

But the mum claims she reached her breaking point when her eldest son suffered burns from water pouring from the bathroom ceiling while he was using the toilet.

Kathleen told the Record that she started to notice the change in her health about a year after they moved in.

"The boys and I have now all taken an allergic reaction to the mould which is on our walls,” she said.

“My skin is flaring up and I'm struggling to breathe.

"But at the start of November, at about 9.30pm one night, I heard these God-awful screams coming from the bathroom.

"My eldest Jamie, who is non verbal autistic, was screaming on the toilet as this burning hot water was coming down from the ceiling onto his head.

"Goodness knows what this must have felt like on his skin."

But Kathleen said the family's ordeal did not end there and just a few days later she suffered a head injury when the same ceiling collapsed, despite a tradesman coming out to assess the water damage.

She said: "The council got someone out after Jamie was burned and he managed to get the pouring water to stop but he said the roof looked like it was going to cave in."

Kathleen added: "The next morning I went into the bathroom and the whole roof caved in on my head.

"My two boys had to pull me out of the rubble with my head split open."

Kathleen then claims the roof collapsed again while the family waited for repairs, this time with rubble falling on top of her youngest son, Paul.

She said: "The kids are now terrified to use the bathroom, they either pee in a bucket or run to the neighbours."

The bathroom roof has collapsed on Kathleen and the boys several times, making her son afraid to use the bathroom

Kathleen claims that despite numerous complaints to the council, the issues with the property have not been resolved.

Having just had major bowel surgery for a medical condition, she is now pleading with housing bosses to make the four-in-a-block home habitable .

She said: "I've been in touch with the council around 20 times.

"There is still water coming down into the home – some of it is yellow water which I've since found out is human waste.

"The council did send a plumber and joiner to inspect the property, but I still haven't heard anything back.

"I have over 60 stitches from my operation, but still can't use the bathroom safely."

Kathleen said: "By this stage we are just at the end of our rope with everything.

"My kids are just shells of what they were. We are only sleeping two or three hours a night.

"I've tried everything and feel like nobody is listening."

Shona Robison MSP, once contacted by Kathleen, said: “Upon being made aware of the issues at my constituent’s property, I immediately contacted Dundee City Council to bring this matter to their attention and request that they urgently investigate the concerns raised and assist my constituent.

“I share my constituent’s concerns about the issues at their property and I am determined to ensure that Dundee City Council takes every possible step to resolve these as quickly as possible.

“I am continuing to follow up with the Council and will keep in touch with my constituent about this until the matter is fully resolved.”

“Our Housing Repairs service are actively engaged in the matter and are undertaking the necessary steps to resolve the issue long-term.”

Previous : Young adults more likely to put pets in their will – but experts are warning against it
Next : South Korean eye-poking cult behind country’s Covid surge as believers avoid jab – World News