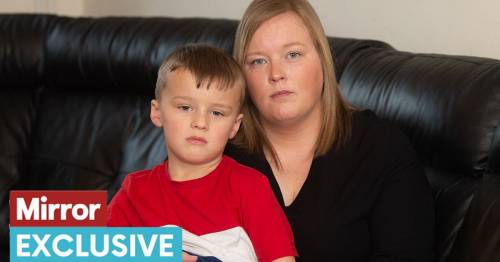 A five-year-old boy expelled for "bad behaviour" will have spent a year at home before he fully returns to school.

Little Zac was just four-years-old when he was booted out of his school in October over behavioural issues.

Mum Laura, 36, told the council her son had undiagnosed special educational needs and resisted attempts to send him to another mainstream school.

The 36-year-old, from Redditch, Worcs, slammed Worcestershire County Council for failing to find Zac a place at a special needs school following his expulsion.

She has even accused the council of "breaking the law" after Zac reached compulsory school age and was still stuck at home.

However, Zac has now finally been offered a place at a new autism unit at Chaddesley Corbett school in Kidderminster.

Laura's local council has finally found a new school for her son, who has been diagnosed with autism
(

Laura told The Mirror: “The council have now offered Zac a school place and we will start the slow process of reintegration after the next half term, with an aim to start full time in September.”

Although Laura is pleased that Zac is finally returning to the classroom, she voiced concerns that her son will have missed out on almost a year of full-time education.

She said: “September is a long time away. He’s fallen behind. He can’t read or write at the moment.

“He should know how to write his name and he should be starting to read. His name is only three letters and he can’t write that. It’s sad.

“It’s affecting his development massively. Socially he’s not where he should be at. He’s going to find it harder to socialise with children now.”

Laura previously said her son had spent so much time in the house that he was scared to go outside.

Just days before receiving the news about Zac’s place, Laura told The Mirror that Worcestershire County Council had "broken the law" by missing the deadline to get her son back into school.

She said: “The law states that the term after their fifth birthday they should be in education.

“Jack turned five in February so on April 26 he should’ve been back in school as that’s when the kids went back after Easter.

“It’s so frustrating. They have had since October to sort this out.

“If as a parent I didn’t send my son to school when they turned five I would be taken to court – or they would want to know why he wasn’t in school.”

He was booted out over a number of behaviour problems, including attacks on other pupils and staff.

Laura explained that her life has been on hold for the past seven months while looking after Zac at home.

She has not been able to work because she does not have anyone around who is able to watch him.

Although she has tried to teach him at home, Zac quickly loses interest.

Laura is speaking out to raise awareness about the difficulties in accessing proper education for children with special needs.

She said parents face a "postcode lottery" as councils have different policies for special educational needs.

The mum claimed that while Birmingham City Council would have offered her son alternative education immediately after his expulsion, this was not an option in Worcestershire.

Zac was expelled from Holly Hill Church School in October
(

Zac spent months at home as Worcestershire County Council did not have a legal duty to find him a new school until his fifth birthday.

Laura previously said she thought the UK's compulsory school age should be lowered to four-years-old to ensure children stay in education once they start school.

Worcestershire councillor Marcus Hart, cabinet member for education, apologised in response to Laura’s claim that the council had "broken the law".

He added: “We are sorry that Zac has yet to start his new school this term and we acknowledge this delay brings continued frustration to both Zac and their family.

“Our SEN (special educational needs) service are communicating directly with Ms Jordan to confirm interim support for Zac, a school placement that is right to meet his needs and the start date for this.“

Mr Hart previously acknowledged that the law required all children to start full-time education by the beginning of the term following their fifth birthday.

In March, he told The Mirror that he hoped to have Zac ready to start school in April.

A Department for Education spokesperson previously said: “Suspensions and permanent exclusions should only be used as a last resort, but we back headteachers to suspend or exclude pupils where it is necessary and helps maintain calm classrooms.

“We are consulting on changes to behaviour and exclusions guidance to make sure this is used in a fair way, and the cross-government SEND Review will further consult on how children with special educational needs and disabilities are supported by the system, including in alternative provision.”