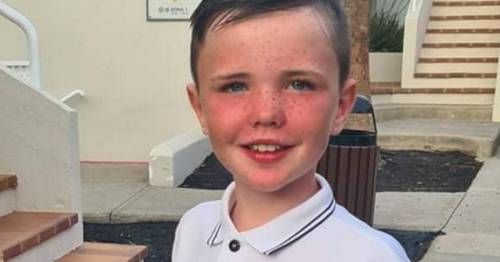 A primary school boy was rushed to hospital after taking part in a TikTok challenge involving small magnets, a Facebook post has revealed.

Borestone Primary School in Stirling have shared a post informing parents of the dangers of these challenges after Jack, 9 had to undergo 'serious and lifechanging surgery'.

His mother had informed the school of the incident, and wanted his story to be known in order to alert other parents of the potential dangers of the new social media trend.

The challenge involves places two tiny magnet balls on each side of the tongue to look like a tongue piercing.

What do you think to this story? Have your say in the comments

Jack's mum, Carolann, was told that the damage could be so severe that he may not make it through the surgery.
(

Then, the balls are moved around to give the illusion that it is real.

Mum, Carolann explained how her son was admitted to hospital after experiencing pain in his abdomen and uncontrollable vomiting last Tuesday.

After being admitted to Royal Hospital for Children in Glasgow the following day, X-rays showed that he had tiny bits of metal blocking his bowels.

After inspection, it was discovered that these were in fact magnets.

"It was quickly discovered that these were magnets and, after a bit of probing to get the truth, Jack admitted that he had swallowed these," Carolann said.

The following day, doctors spoke to Carolann to inform her that the matter was urgent.

She said: "Not realising the extent of what was going on, it was explained to me that these magnets needed to be removed urgently but that it wasn't a straight forward operation."

She was given three possible scenarios for the surgery, one of which being to remove the magnets and the bowels and depending on the severity of the damage, fit a stoma bag.

Carolann was warned that the extent of the damage may be catastrophic and the surgery was complicated, so he may not pull through.

She was told to be prepared that anything can happen, and was asked to sign her consent "Through floods of tears."

After a four hour agonising wait for the surgery to be completed, Carolann was informed of how Jack was doing.

He needed four-hours of surgery after the balls had clumped together in his bowels which cut off his blood flow.
(

"My funny, outgoing, healthy 9 year old had been affected that badly that he had lost his appendix, his small bowel and 30cm of his large bowel," she said.

"We are now day 5 post op and Jack is still solely on fluids, unable to walk unaided and all round not the wee boy he was a week ago.

"The surgeons are fighting tooth and nail to have these magnets banned for the damage they can do."

Carolann has asked the school to educate children on the dangers of these challenges that can very easily lead to live changing injuries and death.

Sadly, Jack is not the only child to have been hospitalised over these magnets.

The NHS has issued an alert after least 65 children were admitted to hospital for urgent surgery in the last three years after swallowing these magnets.

In one instance, a pair of twin toddlers were hospitalised in Cambridgeshire after ingesting these lethal magnets.

One of the twins had swallowed 16 of them, which had caused the bowels to twist.

When swallowed, the balls clump together in the intestines or bowels and cause the tissue to squeeze together, which shuts off blood supply.

NHS England top doctors are calling for these magnets to banned, and warn that ingesting more than warn can cause devastating damage within hours.

Previous : ‘A family reunion’: Voices from Broadway on the return to the stage
Next : Couple horrified as wedding venue demands £20,000 minimum spend and cancels big day