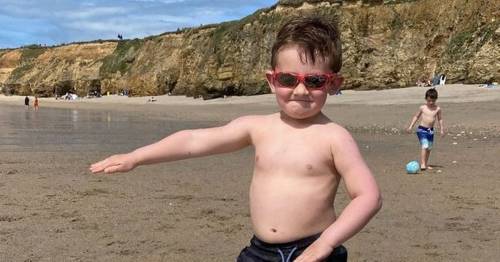 Boy, 4, left screaming in agony when his foot ‘melted like wax’ after stepping on sand

A four-year-old boy was left screaming in agony when his foot 'melted like wax' after he stepped on red-hot sand.

Ezekiel Long was rushed to hospital following a step on to boiling hot sand while playing on the beach.

His mum has pleaded with with beach users to ensure beach bonfires and barbecues have been properly extinguished after he needed hospital treatment after suffering burns on his foot.

Kerensa Long shared an image of his injury in an attempt to remind others to dampen fires with sea water or mark them with stones to show they can be dangerous.

CornwallLive, however, reports there was "no evidence" of a fire where Ezekiel burned his foot at Grebe Beach near Falmouth.

But Kerensa said: "As it's that time of year, I just want to send a message to people to clear up and make sure it's safe before they leave.

"Take the barbecue home or wash it in the water first. It's irresponsible and it can have a big impact."

His mum, Kerensa Long, shared an image of his injury to remind others to dampen beach fires
(

Ezekiel was taken to hospital where he was seen immediately for his wound.

He later returned to hospital for further treatment on his foot

"The bottom of his foot is completely blistered and tomorrow they have to cut all the skin off," said his mum.

"He's all bandaged up and on ibuprofen and paracetamol but he can't put a shoe on and probably won't be able to go to playschool on Monday."

Karensa said she felt that it was even more important considering that there could be even younger children crawling on the beach who may be unable to lift themselves from the burning sand.

The Mirror told yesterday how a welder was left with huge blisters the size of golf balls and unable to walk after coming into contact with "Britain's most dangerous plant".

Nick Sherratt, 53, said the giant hogweed he touched left him in so much pain that "if somebody came with a hacksaw, I would have gladly said please take it off".

Nick said he accidentally touched the plant when he slipped off a footpath at Porthjoke Beach in Cornwall leading down to the sands.

But he felt nothing at the time.

The following morning however, Nick woke and started vomiting and had a soaring fever and the shakes.

His symptoms became worse before his leg blistered and ballooned horrifically before his pain became unbearable.

Nick said: "It was a Saturday afternoon when it happened; Saturday evening we nipped out to get my son from where he works and we came back, had a meal – no problem, nothing at all.

"But then it was a totally different story on Sunday.

"First thing in the morning, I started violently vomiting, I got a fever, terrible shivering, I couldn't get warm, I was wrapped up in bed – it was just non-stop."

Previous : Body of man found in flat after neighbour ‘hadn’t seen him for months’
Next : “Cha Cha Real Smooth,” Reviewed: It’s Sentimental and Cynical and Has One Truly Great Performance