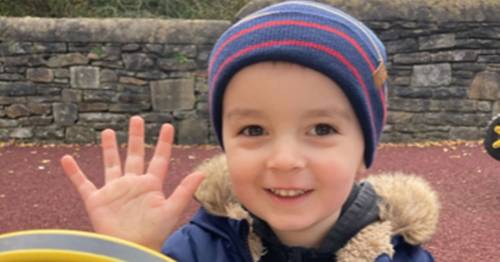 Boy, 3, found roaming the streets after wandering out of school alone

Furious parents have told how their three-year-old son had been allowed to leave school alone and appeared at their home soaking wet with a stranger after wandering the streets.

Miles Diffey went missing from his class at Trealaw Primary School in North Wales on Friday but his parents say they weren't notified and they never knew there was a problem until he arrived on their doorstep, reported WalesOnline.

Miles, who is non-verbal, was meant to be at the Rhondda Cynon Taf school until he was collected at 11.50am but to mum Georgia Wilcox's surprise her son had walked home from school by 10.50am.

She said a woman saw the young boy wandering the roads of Trealaw before following him to make sure he got home safe.

Georgia, 28, said: "She had no idea how long he had been out and found him on one of the hills coming down to our house. He was soaked through, his nappy was full, and it seems he had been out walking for a while."

The toddler returned home with a stranger on Friday
(

She and the toddler's dad William Diffey, 29, said they were "shaken up" and "angry" and claimed the school won't show them the CCTV to know when exactly he left the school.

They claim they were given numerous explanations and times when he left the school and Georgia said: "I just feel like we're being lied to and they're trying to cover their own backs.

"We were initially told Miles got out through a fence, then he left through the main gate and left the school at 10.35am which they saw on the camera but we now know he was seen at 10.30am out of the school so none of it makes sense. I just want answers."

Georgia and William said a meeting has been organised with the school on Monday.

They added they would not be sending Miles back to school after the incident.

A Rhondda Cynon Taf Council spokesperson said: “The safeguarding of pupils is of paramount importance and a full investigation into this serious incident is already underway.

“Council Officers and Social Services staff will work meticulously to understand how this incident occurred and where issues are identified immediately put in place measures to prevent this from happening again, and address any additional concerns that are identified as a result of the investigation.

“We fully share the concerns of parents and guardians of pupils, and they will shortly be receiving a letter regarding the incident.”