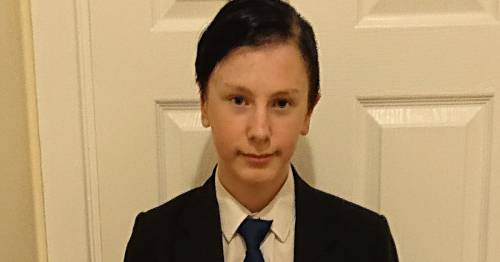 A mum claims her son was excluded after his school refused to let him wear trainers following foot surgery.

Crystal Smith claims her 13-year-old son, Joshua, who is a pupil as West Derby School in Liverpool, was forced to sit in the corridor due to school's uniform policy.

During October half term Joshua underwent surgery on his toe which causes him discomfort and pain and could take 12 weeks to heal.

Since the operation, Crystal claims the school refuse to let him wear trainers despite having a letter from a doctor saying he can't wear normal shoes until his foot is healed, Liverpool Echo reports.

"He's got to sit outside the office as I said I don't want him in isolation as isolation is a punishment and he's done nothing wrong.

"They said to me, 'well he can't be in class so we'll sit him outside one of our classrooms'."

"They wanted to both at the same time but I said no because he wouldn't be able to walk.

"The trainers are soft so it's not pressing on his toe and I'm not asking for him to wear them all the time.

Crystal claims she told the school that she would keep her son off school for 12 weeks if they wouldn't allow him to wear trainers, but said Joshua wanted to go to school as he "didn't want to get his mum and dad into trouble".

The mum, who has three boys at West Derby School, claims she told the school she has a letter from her son's doctor saying he can't wear normal shoes while his foot is healing.

Crystal said: "They said the doctor's letters don't mean nothing because the doctors don't know the school rules."

Previous : Jamie Dimon jokes that JPMorgan will outlast China’s Communist Party
Next : Melanie Sykes speaks about moment she realised she was autistic on ITV’s Loose Women