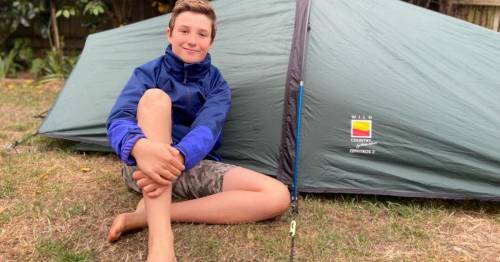 A young boy has gone nearly 600 nights without a bed in a mission to raise money for a hospice following the death of his neighbour.

Max Woosey, 12, had forgone his bed to go on a campaign to spend his nights sleeping in a tent every single night battling sub-zero frosts, heatwaves, and even Storm Bell.

Now due to his astonishing determination, he has raised £680,000 – enough money to pay the annual salary of 20 hospice nurses.

His amazing fundraising efforts have already been acknowledged at the Pride of Britain awards where he won the Spirit of Adventure award.

He first began his efforts on March 27 of last year in remembrance of his friend and neighbour, Rick Abbot, 74, who sadly died in February 2019 after battling cancer.

Max Woosey camping out in his tent in his garden in Braunton, Devon
(

Rick had gifted Max a tent to start an adventure with – with this, Max decided to start his adventure by camping out in his back garden.

That was the beginning of a long journey, as tonight marks Max's 600th consecutive night camping outside.

Max Woosey began camping in his garden on March last year in memory his friend and neighbour, Rick, who sadly died in February 2019.
(

And the fundraising could not have come at a better time as the hospice faced a £1m drop in funding because of the pandemic.

Spokesperson Leo Cooper said: "I cannot over-emphasise how important his fundraising has been," he said.

"At lockdown, we were looking at the prospect of losing £1m, that adds up to a whole lot of care that we cannot provide and it was needed, especially during the lockdown.

Max Woosley presented with his Pride of Britain award by Bear Grylls.
(

"Max's fundraising equates to almost 20 nurses for the whole year, so that gives you an idea of the scale."

Max's father, Mark, said the family was "blown away" by the amount of money raised by his brave son's efforts.

He said: "As a family, we have been blown away that he has been able to help the hospice.

"The work that they do is amazing."